MCGUINNESS ACCUSES ROBINSON OF “RETREATING INTO THE PAST” 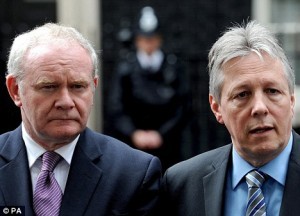 Deputy First Minister Martin McGuinness has accused First Minister Peter Robinson of “retreating into the past” during a heated debate in the Assembly.

Rejecting claims by Mr McGuinness he was showing “cowardice” as a politician by not speaking out about alleged UVF involvement in recent violence and racist intimidation, Mr Robinson listed a series of IRA killings including the Enniskillen and La Mon bombings.

However, Mr McGuinness hit back accusing Mr Robinson of “retreating in to the past” and that the “cowardice” he referred to was “here and now.”

Mr McGuinness said: “During my time as Deputy First Minister, I have tried to avoid recriminating about the past.

“In response to Peter Robinson’s comments today, I could raise many issues around unionist politicians involvement in the Ulster Workers strike, collusion with loyalist paramilitaries and the setting up and import of arms by Ulster Resistance.

“But in retreating into the past, Peter Robinson misses entirely the point.

“When I talk about a failure of leadership and political cowardice, I am talking about the here and now.

“I am talking about the failure of unionist leaders to stand shoulder to shoulder with the rest of us in denouncing the squalid sectarian and racist violence of the UVF.

“The failure to name and condemn the UVF. The attempts to divert attention and implicitly excuse the UVF in a quest for extreme loyalist votes.

“I have stood shoulder to shoulder with unionist leaders in condemning the activities of so called dissident republicans.

Mr McGuinness concluded: “We have not seen the same united approach in response to UVF-orchestrated violence against isolated members of our ethnic minority communities, against the small nationalist community of the Short Strand, against the PSNI during the flag protests or against Alliance party offices.”

MCGUINNESS ACCUSES ROBINSON OF “RETREATING INTO THE PAST” was last modified: May 19th, 2014 by stephen