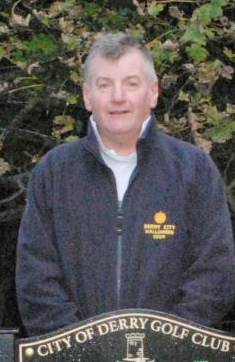 The team competition was won by Peter Harkin’s team.

Eamon’s sensational victory after 22 years on tour was highly deserved.

Over the four days on the tough Poniente and Santa Ponza courses, he scored 39, 39, 39 and 40 points exhibiting a level of course management skills that have never hitherto been seen on the 37 years of this great tournament.

After losing out in last year’s play-off, but could not dent the six point lead Eamon McCourt had had when they teed off together in the last fourball.

Tournament Organiser Andy Meenagh expressed his delight at Eamon’s victory when he presented him with the highly coveted Travellers’ Trophy.

Top 10 Finishers over the four days

(City of Derry unless otherwise stated)