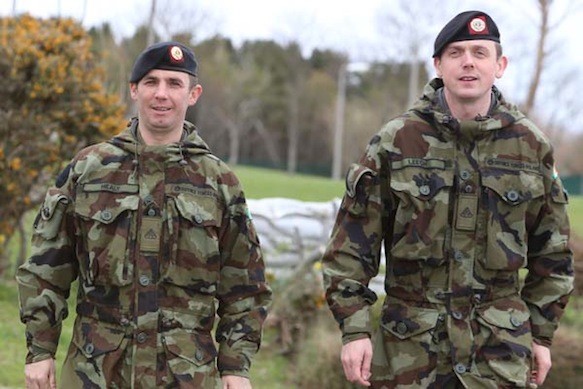 FAMILY RESCUED FROM OVERTURNED CAR… “WE WERE IN THE RIGHT PLACE AT THE RIGHT TIME,” SAYS DERRY MAN

A Derry man, who along with three Irish soldier colleagues rescued a trapped family from their car after it went off the road and flipped onto its roof, has said they were simply “in the right place at the right time.”

Stephen Healy, David Leech, Lee McFadden and Conor Doherty have all played down their part in the rescue.

The four, who are all based at Finner Camp, were returning from work when the drama unfolded on the outskirts of Ballybofey.

The car on front of them suddenly went out of control and crashed into a field flipping onto its roof.

Laura Faulkner, her husband Neil and the couple’s three children, Mia (three months), Alyssa (18 months) and Amber, four years, were travelling back after a night away at the Gap Lodge in Barnesmore to celebrate Neil’s birthday.

But at around 9.30am on Sunday morning last, disaster struck when their car veered violently off the road and into a field.

The terrified family could not get out of the car after its doors became embedded between an embankment and a barbed wire fence on the outskirts of the town of Ballybofey.

Laura said she had visions that the car was going to explode into flames.

“I managed to climb into the back to help the children who were screaming with fear. 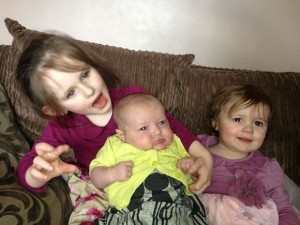 The Faulkner children who were rescued after becoming trapped.

However just seconds later as they lay helpless and with their children screaming in the car, help arrived.

The soldiers calmly parked their own car and set about rushing to the stricken family’s aid.

Stephen, from Derry’s Bogside area, said they only did what anybody would have done.

“As soldiers we are trained for such situations and it all went very smoothly.

“We kept talking to eachother and talking with the family. They were frightened but we tried to put them at their ease.

“It wasn’t to long before we had them out and thankfully there was no real injuries apart from the shock of it all.”

Once the soldiers managed to rescue the family, who hail from Co Antrim from the car, the emergency services including two ambulances and Gardai arrived on the scene.

The family were taken to Letterkenny General Hospital for check-ups but were released later that night.

“All I can say is thank you. I can never put into words how much they did for us and how grateful we are.

“They went above and beyond the call of duty. Even after they rescued us from being trapped in the car, they went back and got the children’s things out of the car for us.

“They are a credit to their families and to the Irish Army,” she said.

FAMILY RESCUED FROM OVERTURNED CAR… “WE WERE IN THE RIGHT PLACE AT THE RIGHT TIME,” SAYS DERRY MAN was last modified: April 14th, 2014 by stephen