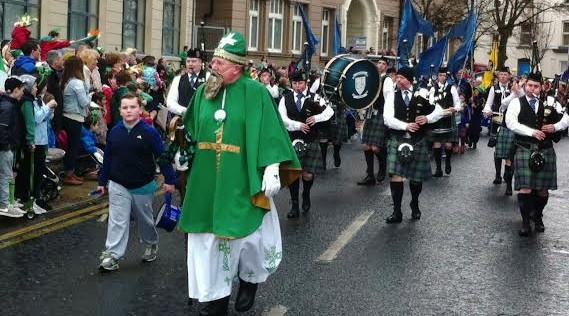 Record numbers turned out for the St Patrick’s Day festivities in Derry, it has been revealed.

Over 50,000 visitors from as far away as America and Australia enjoyed the three-day programme of events organised by Derry City Council, which culminated in the Spring Carnival parade on Monday.

Hotel occupancy peaked at 92.13% on Saturday, the opening day of the three day festival programme, and remained well above average over the weekend.

And, according to the Council’s Head of Economic Development, Linda Williams, the figures reflected the city’s growing status as an “exciting tourism destination.”

She said: “We are delighted to have been able to welcome so many people to the city over what is always one of the most popular celebrations of the year.” “Last year, our City of Culture status meant Derry had the opportunity to showcase its ability to stage world class events such as the Fleadh and Lumiere, and we are reaping the benefits this year as many return to enjoy the warmth of our hospitality.

“Last year we, had around 10,000 people and we anticipated that we would have around 15 or 18,000 and are absolutely delighted that we achieved treble that number over the three days.”

Next up for the city is the Pan Celtic Festival taking place from 22 – 27 April followed by the City of Derry Jazz Festival being held from 1 -5 May.

Things will then get nautical from 21 -29 June when the city will host the Foyle International Maritime Festival to welcome the Clipper Round the World Yacht Race fleet.

One of the highlights will be the much-anticipated appearance by the Beach Boys on 26 June.