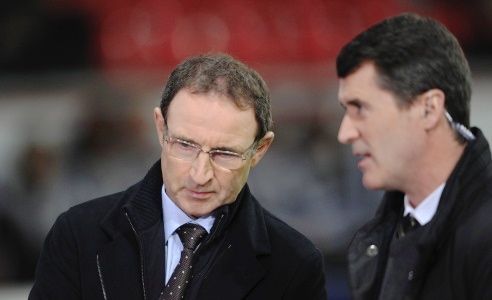 IRELAND TEAM BOSS: WAIT GOES ON FOR O’NEILL AND KEANE

Martin O’Neill and Roy Keane – dubbed “the good cop, bad cop” combination – are expected to be confirmed as the new management team of the Republic of Ireland on Saturday. John Delaney, chief executive of the Football Association of Ireland, has confirmed talks between the pair are at an advanced staged.

Mr Delaney said contracts had not yet been signed but he saw “no impediment” to Kilrea man O’Neill, a former pupil at St Columb’s College in Derry, being confirmed as manager of the senior international team on Saturday with  former Republic and Manchester United midfielder Keane as his assistant.

While O’Neill’s appointment will come as no surprise it is the choice of Keane that is raising eyebrows, especially after his fall-out with the FAI and Mr Delaney in the 2002 World Cup when he was ordered to leave the squad by then manager Mick McCarthy.

The rift between Mr Delaney and Keane was still raw four years ago when the 42-year-old launched a stinging attack on the FAI chief executive.

Replying to a question about Mr Delaney at a press conference in 2009, Keane said:

“I wouldn’t take any notice of that man. People forget the last time Ireland were in the World Cup, 2002.

“People seem to forget what was going in that World Cup – and that man is on about honesty. I was one of the players – he did not have the courtnesy to ring me. He got interviewed and all he said is ‘I don’t know where he is, he is on the island, he is on the island somewhere, I think.’ I been involved with Ireland for 15 years and that man did not have the decency to even make a phone call. He could have phoned me, of course he could  – try my hotel room.”

It is believed the delay to announcing O’Neill as manager was due to the fact the Derry man wanted Keane as his number two and that several “clear the air” meetings took place in recent weeks between Mr Delaney and Keane.

It is also understood it will be only O’Neill who will be introduced to the media on Saturday as the FAI are anxious to show the 61-year-old is the manager and it is his decision to bring in Keane as his assistant.

The appointment of O’Neill will see him once again link up with former Derry City winger James McClean who managed during his tenure at Sunderland.