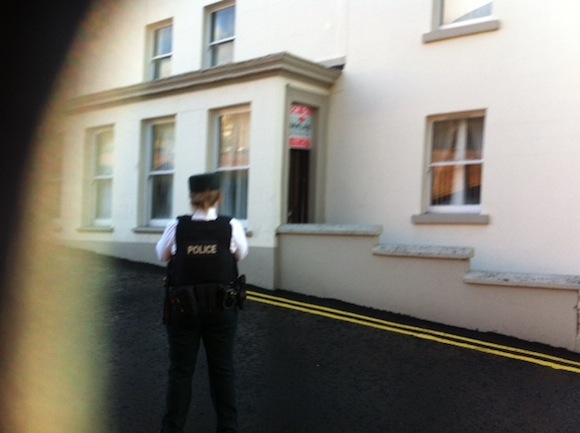 The scene of the latest arson attack this morning.

Emergency services have dealt with two overnight arson attacks in the city.

The latest incident occurred at a large unoccupied house at the junction of Academy Road and Northland Road, only yards from the local fire station.

Police are currently guarding the premises awaiting forensic officers to arrive to investigate what caused the blaze, which was reported to emergency services at 4.00am this morning.

The roof to the rear of the building, not visible to members of the public, has been badly damaged. No one was injured in the incident.

Four fire crews from the Northland Road station, spent over three hours at the scene.

Earlier, up to 50 firefighters attended a major five at the former St Peter’s High School in Derry.

At the height of the blaze, which was reported to emergency services at 8.30pm, firefighters, wearing breathing apparatus and carrying search lights, entered the disused school to carry out a room-by-room search after being told there was someone in the building who may have been overcome by smoke.

Speaking to the Derry Daily at the scene, senior fire officer Mark Smyth said they were treated the incident as a “deliberate ignition.”

During the incident, which took three hours to bring under control, residents living in nearby homes were  advised to keep their windows and doors shut to avoid suspected poisonous smoke from burning asbestos.

Over 200 people watched on as firefighters tackled the blaze. It is the second time in a matter of months the former school, situated at Foyle Hill on the edge of Creggan Estate has been targeted by arsonists.

Many of those looking on expressed their anger and called for the building, which has lay vacant since principal, Martin Bowen, closed the school gates at the end of the school term in June last.

It is understood, a forensic examination into what exactly caused the fire, will not take place until tomorrow morning.