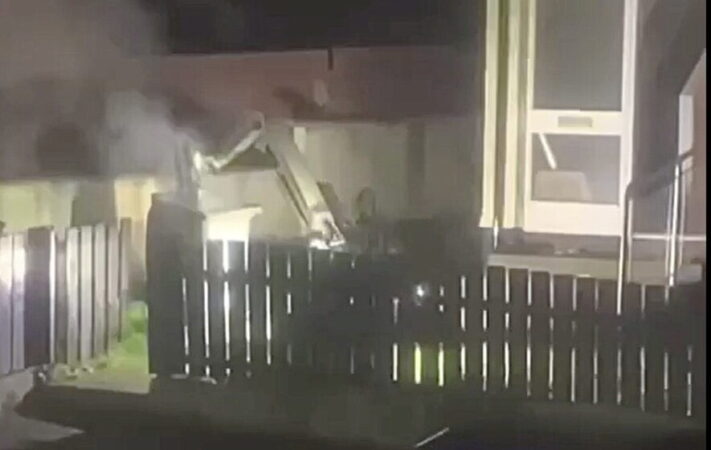 A major security alert in Strabane was sparked after a PSNI torch was left at a house during a police raid.

Homes were evacuated in the Innisfree Gardens area and the district was sealed off after the discovery of what was described as a “suspicious object” at around 8.20pm on Monday.

Footage has since emerged of a British army bomb squad carrying out controlled explosions on a wheelie bin outside a house.

Police later said the object had been “declared as nothing untoward.”

However, the Irish News has reported today that the object was in fact a PSNI torch, which had been found by the householder after an earlier search and thrown into a wheelie bin.

When police later returned to the property the wheelie bin containing the torch was examined.

A security alert was then declared and homes evacuated.

A spokesman for the PSNI last night said: “Police searched a property in Innisfree Gardens on two occasions – the 18th November 2022 and 21st November 2022 – in relation to the attempted murder of two police officers at Mount Carmel Heights, Strabane on Thursday 17th November 2022. A search warrant was obtained for both searches.

“During the search on 21st November 2022, police looked inside a wheelie bin located outside the front of the property and subsequently discovered a suspicious object, which was not originally the subject of the search.

“The area was immediately cordoned off as the safety of members of the public and police officers will always be the priority.

“ATO subsequently declared the item to be nothing untoward.

“Further examination of the object has confirmed it was a police issue torch, which was reported missing today, Wednesday, November 23rd.”

The alert took place days after two PSNI officers escaped injury when their car was targeted in a roadside explosion in Strabane last Thursday. The attack has been linked to the New IRA.

Since then several raids have been carried out in the town. Six men who were arrested have since been released, including a 50-year-old man last night.

Further searches have also been carried out in Coalisland and Sion Mills areas of Co Tyrone.

Paddy Gallagher, a spokesman for hardline political party Saoradh, said the torch was discarded after being found.

“Having discovered that it was discarded in the bin they (PSNI) then proceeded to initiate a ‘security alert’,” he said.

Both the SDLP and Sinn Féin representatives have spoken out about the alert.

Mr Gallagher added that he now awaits their “response to this latest development whereby the crown forces themselves caused widespread disruption by their own ineptitude”.