Higgins: It’s a shame if we have to turn people away

Derry City manager Ruaidhri Higgins says he would support the expansion of the capacity of the Ryan McBride Brandywell Stadium and a return to a grass pitch at the venue.

Derry’s recent FAI Cup success and a runner-up finish in the League of Ireland Premier Division has brought about increased support for the club.

“You don’t want people missing out on watching the team play,” said Higgins.

“There’s a buzz in the city. It’s a shame if we have to turn people away.”

The current capacity of the Brandywell is 3,700, with Derry City FC the anchor tenants of the Derry and Strabane District Council-owned facility.

Club chairman Philip O’Doherty has previously called for the release of funds earmarked for upgrading football stadiums across Northern Ireland under the Sub regional Stadium Programme.

The much-delayed £36m financial package needs signed off by the Northern Ireland Executive however.

The club has indicated a desire to move forward with plans to expand the Mark Farren Stand to create a larger capacity at the ground.

O’Doherty has also signalled that he will make the case to the District Council to revert the Brandywell pitch back to natural grass from the existing 3G synthetic surface in the belief that Higgins’s squad is better suited to playing on grass.

The club’s away form on grass pitches proved important to their progress towards a second-place finish in the league in the 2022 season.

“I would prefer a grass pitch but if we can’t get one we have to deal with it,” said Higgins.

“Our away form has been exceptional and the players prefer grass,” confirmed the former Dundalk assistant boss.

Higgins and his squad have been visiting schools in the Derry area with the FAI Cup, which they won by defeating Shelbourne 4-0 in the final at the Aviva Stadium on 13 November. 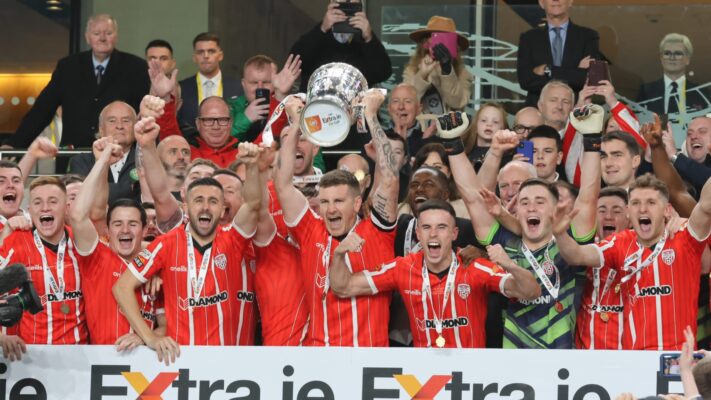 “I think the club’s future is in good hands. There is a real core of young supporters, you see it at the Brandywell on a Friday night, young ones hanging round waiting for the players after a game,” he observed.

“Ten years is too long for the club without a major trophy and you can see the impact it has had around the city.

“It has brought so much joy to so many people and we are grateful for the support. There is a real connection between the club and its supporters at the moment.

“Hopefully that provides a springboard and a catalyst for more people coming through the gates.”