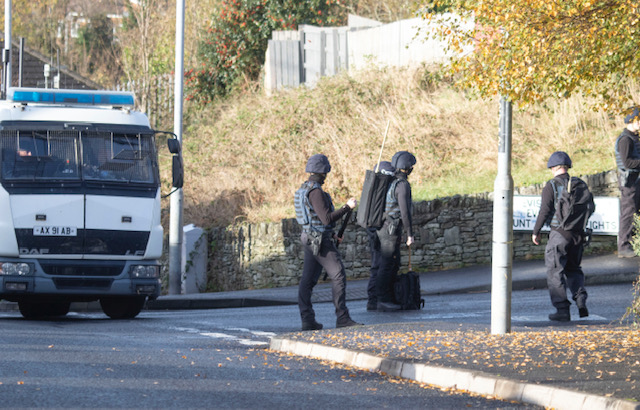 Bomb squad officers at scene of a bomb attack on police officers in Strabane on Thursday, November 18. Pic by NorthWest Newspix

Four men, aged 38, 36, 36 and 28, arrested by detectives from the PSNI’s Terrorism Investigation Unit, investigating the attempted murder of two police officers in Strabane on Thursday evening, November 17, have been released following questioning.

Police say the investigation into the attack continues.

The officers were on patrol in the Mount Carmel Heights area when an improvised explosive device exploded near their vehicle.

The officers narrowly cheated injury in the attack.

Assistant Chief Constable Bobby Singleton said a major line of enquiry for detectives was the attack was carried out by the New IRA.

It is understood one of those arrested for questioning was a member of Saoradh, the political wing of the New IRA.