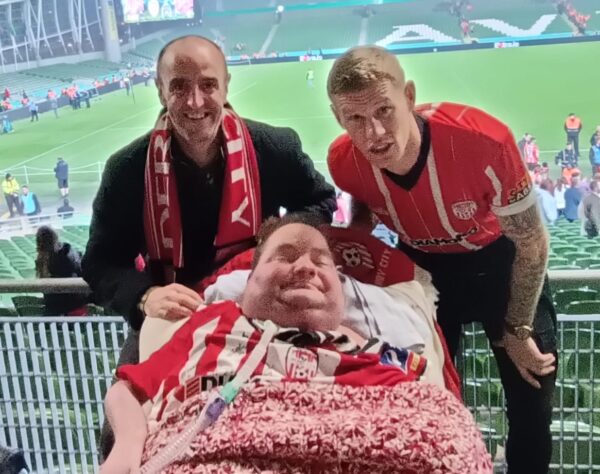 SDLP Foyle MLA Mark H Durkan has paid tribute to local football legend James McClean and the wider Derry public for their generosity in raising £1,700 to secure ambulance transport to the Aviva Stadium on Sunday for the FAI Cup Final for Candystripes superfan Darren McClelland.

The 22-year-old local man has a life-limiting condition and complex needs.

A recent deterioration in his health meant that Darren missed the last few matches and the costly ambulance transfer all but dashed his hopes of travelling to the FAI Cup Final in Dublin.

“Darren is a familiar face at the Brandywell and sadly, his health problems meant he can no longer sit in his wheelchair.

“As such, he missed out on watching his beloved Derry City FC and the impact has taken its toll on his mental wellbeing.

“Orla explained that Darren required stretcher ambulance transfer to the Aviva Stadium but at £1,500 this wasn’t within their budget.

“I launched a GoFundMe appeal late on Thursday evening and was amazed that the target was reached in record time- in less than thirty minutes.

“I’m delighted that Sunday ran so smoothly and were able to make Darren’s dream come true. Yesterday was a special day for so many City supporters.

“It was brilliant to see so many happy, familiar faces in Dublin – and in every Applegreen between there and here.

“We were blessed with good weather and an absolutely outstanding performance and result from the Candystripes, who just blew Shelbourne away.

“It was even more special for Darren McClelland, who travelled to the game in an ambulance thanks to the humbling generosity of the Derry public.

“After watching Derry lift the cup, the icing in the cake for Darren was when he got a visit from one of his footballing heroes, James McClean.

“James had kindly donated money to our fundraising appeal and he showed he is even more generous with his time and really made Darren’s day.

“James often makes the news this time of the year but sadly the stories that don’t make the headlines are the everyday kindness and support that this local man pumps back into his community.

“James embodies all that is good about this city, its generosity, its willingness to help those less fortunate and its heart.

“It’s important to share the good news stories especially amid what has been a pretty dreary news landscape of late.

“Derry pride is soaring high this week and rightly so.

“Massive respect to James and the people of Derry for their contribution.

“This weekend has been one of making memories,” added Mr Durkan.