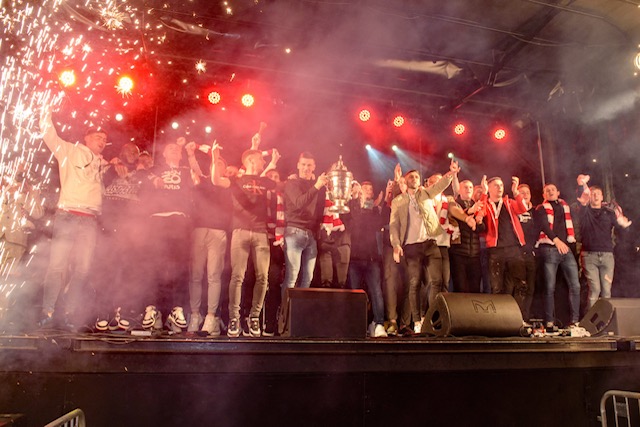 The Candystripes’ 4-0 victory over Shelbourne at the Aviva Stadium in Dublin earned Ruaidhrí Higgins’ men their first cup triumph since 2012.

Sunday’s 4-0 win is the biggest ever score line in FAI Cup final history.

More than 15,000 Derry supporters made the trip to Dublin, with Translink needing to add special services to satisfy demand.

Prior to Sunday’s victory, Derry’s last FAI Cup triumph was 10 years ago when they beat St Patrick’s Athletic after extra-time. 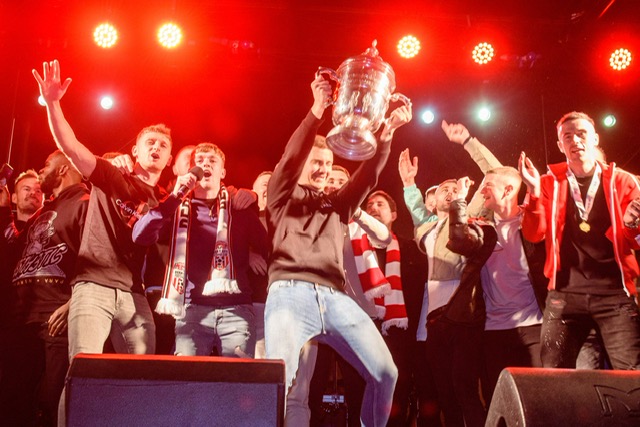 Mayor of Derry and Strabane Sandra Duffy promised the players a “hero’s welcome” upon their return to the city, and that’s certainly what they got.

Against the backdrop of the city’s historic walls, a sea of red and white descended on the city centre to see the players and their newly-acquired silverware.

The squad were introduced one-by-one, until Higgins and captain Patrick McEleney arrived on stage with the trophy.

The team held the cup aloft to roaring applause before breaking into some singing, some of which was of questionable quality but nonetheless rapturously received by the crowd.

Emmett Fletcher, a lifelong Derry City supporter, said the whole city got behind the team and they delivered for the supporters.

He attended the game along with his son Morgan and wanted to come down to Guildhall Square to soak up the party atmosphere.

“It was some game and I’m just so pleased with the result,” he said.

“The buzz around the city in the build-up to the match has been immense and it’s still going strong.”

Cara, Jack, Charlie, Oisin and dad Kevin McCloskey all watched the game on Sunday and came to the showpiece homecoming event on Monday to show their appreciation for the players, coaching staff and everyone associated with the club.

“I thought the atmosphere was unbelievable and couldn’t believe the amount of people who had travelled down to watch,” Kevin McCloskey told BBC News NI. 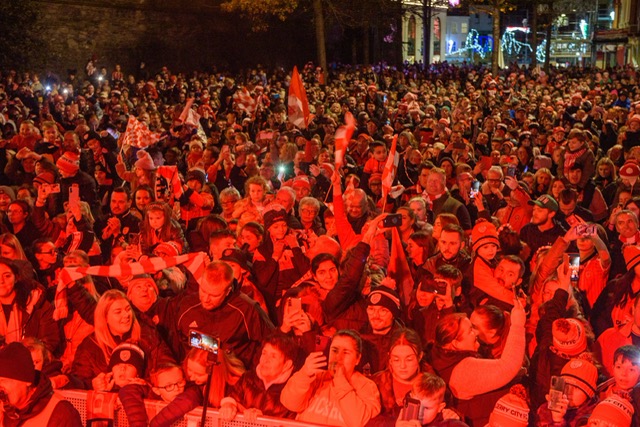 Mr McCloskey wanted to bring his family to “make memories that will last a lifetime”.

Shauna Scott said she only managed a couple hours of sleep after her trip to Dublin, but wanted to keep the celebrations going and “wouldn’t miss it for the world”.

She said people need to savour these moments “especially with all the doom and gloom at the minute”, and that on days like these she’s prouder than ever to be a Derry girl. 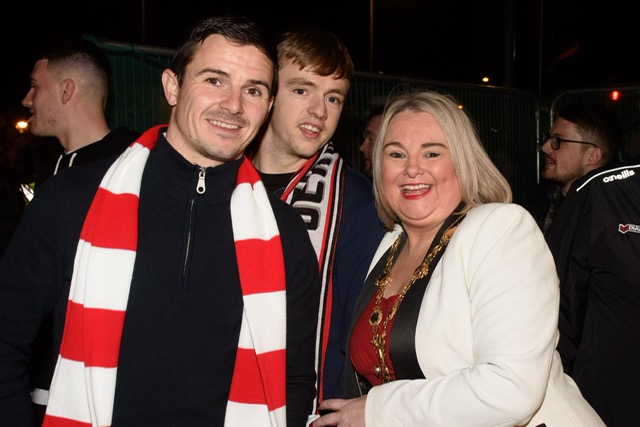 Mayor Sandra Duffy said she was overwhelmed looking out at all the supporters and that the whole team was so proud of their “twelfth man”.

The loudest cheer of the night was reserved for manager Ruaidhrí Higgins.

“I’ve brought the cup home for you,” he told the crowd, adding that the players, supporters and those attending the homecoming were a true credit to the city.