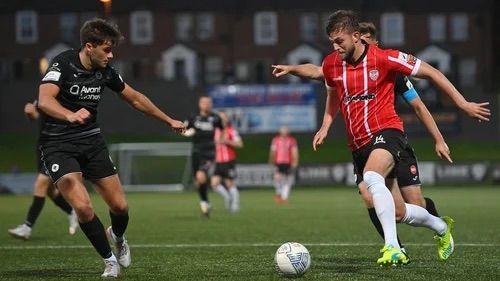 Friday was an eventful night of action in the league and put paid to a potential title decider as the Hoops comprehensively beat St Patrick’s Athletic and the Candystripes slipped up at home to Shelbourne.

That means Stephen Bradley’s side are in a commanding position and a single point more will almost certainly be enough to make it three league crowns in succession, given their superior goal difference.

It’s a must-win encounter for Derry in Sligo – and having lost the reverse fixture and seen the Bit O’ Red post some decent results this month – it could be the end of the road tonight.

If City can manage a victory, it will put them within five points of the leaders ahead of their meeting on Sunday evening.

Speaking after the draw against Shels against Friday, manager Ruaidhri Higgins said he wasn’t giving up hope.

“If we win our next two games it goes down to the final day regardless. So it’s not over,” he said.

“If we win our next two games it goes down to the final game but we need to just win our next game and take it from there.

“It’s a bit of a setback. Although we haven’t lost since the back end of May, and I hope it stays that way, but we have experienced players in key areas and an opportunity to bounce back tonight.”

For Sligo, they’re out of the race for Europe but John Russell will be pleased with the character they have shown.

Three points in UCD was followed by a 3-3 thriller in Oriel Park on Friday night – they were left to rue the concession of a Keith Ward equaliser having led and trailed on the night.

Star man Aidan Keena scored his 19th goal of all competitions and there’s no doubt Derry will have to put in a big response to keep the title race going.

”We were all disappointed to concede a late equaliser on Friday night but, the players put in a really good away performance and there were good signs again on our progress,” said manager Russell.

“Tonight we welcome Derry who have been in great form in recent months. It will be a tough game but it’s one we’re all looking forward to. We want to finish the season strong.”

While the title race dominates the agenda tonight in these rescheduled matches involving FAI Cup finalists, UCD face the biggest match of their season as they face Shelbourne at Tolka Park.

It was a topsy-turvy couple of hours in the relegation dogfight as UCD trailed and Finn Harps led at stages of their games with Drogheda and Bohemians.

College came from behind for a crucial 2-1 win, and Harps had looked like doing the same in Dalymount.

But a late error by goalkeeper Jamie McKeown was a colossal blow for the Donegal men as they fell two point adrift at the bottom.

UCD will extend the advantage to five if they can secure a third away win of the season tonight and that would mean Harps would have win their final two games to have even a chance of safety.

The relegation rivals meet on Friday in a game which could decide the outcome in the race to avoid the drop.