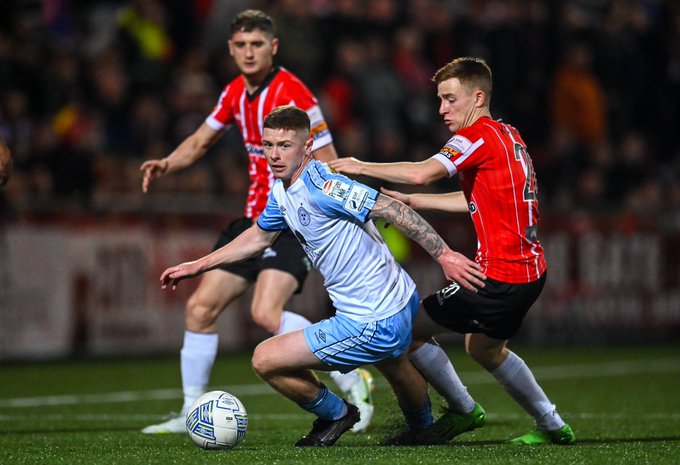 While Stephen Bradley’s men were seeing off St Patrick’s Athletic at Tallaght, Derry had to come from behind to earn a deserved share of the spoils, at a sold out Ryan McBride Brandywell Stadium.

Shels broke the deadlock after a terrible goalkeeping mistake from Brian Maher, as his misplaced pass found Jack Moylan, who gratefully opened the scoring and while Joe Thomson equalised, the home side were unable to find a winner.

The Candystripes should have broken the deadlock on eight minutes as Will Patching’s left wing free-kick deep to the back post found Ronan Boyce, but the unmarked defender failed to trouble Shels keeper Brendan Clarke and the effort went wide.

Moments later Shels were inches away from taking the lead in sublime fashion, but Kameron Ledwidge’s 25-yard pile driver, was superbly tipped over by Maher.

City striker Jamie McGonigle went close on 21 minutes, but his snap-shot from the edge of the box, which had Clarke worried, whistled just past the right-hand post.

The home side were neat and tidy in position throughout the first half, but Shels were happy that everything was played in front of them, as Derry failed to test Clarke.

Derry went close to taking the lead on 55 minutes as Patching’s left footed strike from the right hand edge of the box was parried away by a diving Clarke.

Damien Duff’s side were gifted the lead on 69 minutes as Maher’s terrible pass to substitute Sadou Diallo only picked out Moylan on the edge of the box and he calmly steadied himself and fired high into the net.

The Brandywell men deservedly equalised on 82 minutes as Cameron Dummigan’s cross from the left found substitute Joe Thomson and the midfielder turned the ball into the net from close range.

Deep into stoppage time Thomson was inches away from scoring the winner but he was unable to get anything on Diallo’s right wing cross.