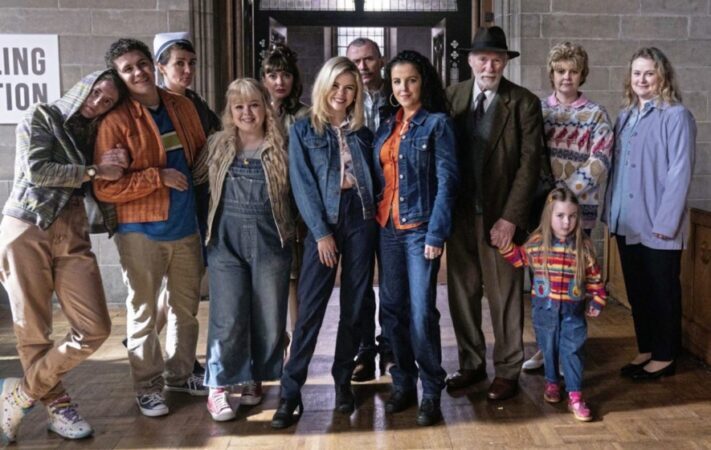 The cast of Derry Girls pictured on the set of the final episode, which was set during the 1998 Good Friday Agreement referendum.

A suggestion has been made to show the final episode of Derry Girls in schools across the UK to aid understanding of the Belfast/Good Friday Agreement.

The final episode of the Channel 4 drama included a poignant look back at 1998 and the atmosphere in Northern Ireland at that time.

Secretary of State Chris Heaton-Harris told the Northern Ireland Affairs Committee on Tuesday that he feels there is education to be done around the importance of the agreement and its impact.

He recalled motorways in England being closed on occasion during Northern Ireland’s troubled past due to bomb threats, and referred to “plenty of unbelievable tragedies”.

“I have become very aware in the short time that I have held this role that there is actually a bit of education to be done in England, Scotland and Wales as to why the Belfast/Good Friday Agreement is so important and what it has done,” Mr Heaton-Harris said.

He described a “lack of understanding, particularly in England and Wales”.

“I don’t think people quite understand the importance of the Belfast/Good Friday Agreement … and the peace that has flowed from it equally, so, it’s been hard won over a long period of time,” he said.

Committee chairman Simon Hoare suggested in response: “Maybe enforced viewing of the final episode of Derry Girls in every school actually would be not a bad thing.”

Mr Heaton-Harris said the anniversary of the accord next year will be a “good opportunity for reflection”.