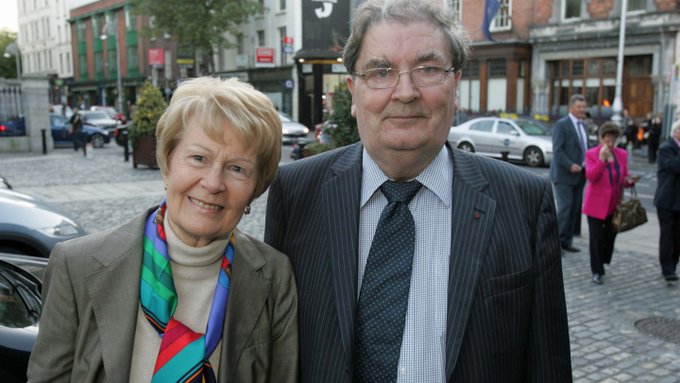 The Irish League of Credit Unions (ILCU) have honoured John and Pat Hume’s contribution to the Credit Union Movement in Derry by announcing their support for Beyond Belief, a major new drama honouring the waking life of the esteemed peacebuilders.

One of John and Pat Hume’s first steps in creating their legacy is the role they played in founding Derry Credit Union and the life-changing impact the credit union has had on the people of this city.

John considered this was his greatest living achievement.

The Irish League of Credit Unions will now honour that legacy by announcing funding of £45,000 for Beyond Belief, screened live across the world as part of 2023 global commemorations marking the 25th Anniversary of the Good Friday Agreement, and performed by the people of Derry in the city’s Guildhall.

Delivered in partnership between The Playhouse and The John & Pat Hume Foundation, the production will be created by writer and poet Damian Gorman, Brian O’Doherty (composer) and directed by Kieran Griffiths.

Chief Executive Officer of The ILCU David Malone said: “The Irish League of Credit Unions is delighted to be supporting this production which celebrates the lives of John and Pat Hume.

“As well as being one of the founders of Derry Credit Union, John was also the youngest ever President of the ILCU aged 27.

“During his tenure from 1964 to 1968, John travelled the length and breadth of Ireland spreading the credit union message to towns and communities, many of whom now have vibrant credit unions thanks to John’s drive and support. John was only able to do this because of the support he had from Pat who kept things on an even keel at home while he travelled the country. Beyond Belief is a fitting tribute to this extraordinary couple.”

Dr Sean Farren, Chair of The John & Pat Hume Foundation said: “The Hume Foundation is delighted the Irish League of Credit Unions has agreed to generously support the play “Beyond Belief”.

“John Hume was a strong advocate of the credit union movement and their positive role as a community resource for individuals and families.

“John Hume often said setting up the first credit union in Northern Ireland was ‘the thing I’m proudest of’.

“At the age of 23, John Hume was a founder member of the Derry Credit Union in 1960. By the young age of 27, he was elected President of the Irish League of Credit Unions.

“He knew people from a working-class background couldn’t borrow from banks and when they needed access to money for normal day-to-day expenditure, their only choice was to go to loan sharks or pawn shops.

“The Credit Union movement was not only transformative for local people it also significantly helped local businesses.”

Producer and Director of the production from The Playhouse Kieran Griffiths, said: “While John Hume has been described as a ‘Titan’, a ‘Giant’ and a ‘Hero’ of peace-making and reconciliation, Beyond Belief, in its words and music, will reach for the man: the man who achieved all he did not glibly, without struggle or alone, but as a human being.

“In re-presenting John Hume, his life and his mission – a mission never fettered by shibboleth, dogma or fossilised tenet – Beyond Belief will seek to inspire those generations through words, music and song.

“We are so honoured to have the support of a social enterprise that holds the same principles as us, those of community, co-operation, co-ownership and mutual help”.

Beyond Belief will be on Friday March 31 – April 7 2023- The 25th Anniversary of the Good Friday Agreement.

Tickets are available at: derryplayhouse.co.uk