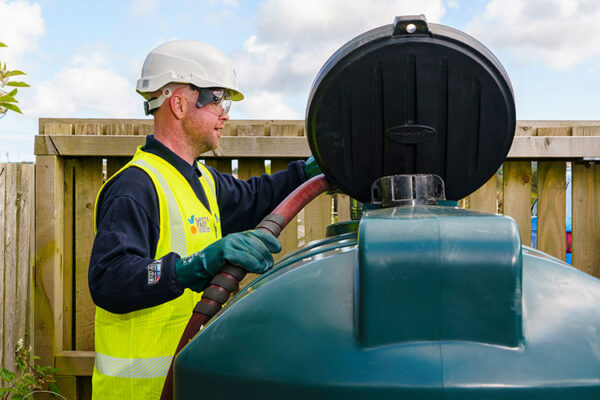 Home heating oil customers in the North of Ireland are to get a one-off payment of £100 to help with rising energy costs.

This will be in addition to a cap on the unit price of electricity announced by the government on Wednesday.

But Foyle MP and SDLP leadeer Colum Eastwood described the payment as an “insult” to struggling families in Derry.

People who use gas to heat their homes will also benefit from a cap on the unit price of that fuel.

The modest support for oil users reflects the fact that gas prices have risen much more sharply than oil in the last year.

The £100 will be delivered as a top-up to the £400 Energy Bills Support payment which is going to all UK households.

‘Insult’
In a statement, the government said: “The government will also provide an additional payment of £100 to households across the UK who are not able to receive support for their heating costs through the Energy Price Guarantee.

“This might be because they live in an area of the UK that is not served by the gas grid and is to compensate for the rising costs of alternative fuels such as heating oil.”

The NI Consumer Council suggests heating oil currently costs more than £520 for 500 litres, compared to about £220 for the same amount a year ago.

The council’s Peter McClenaghan said: “The commitment from the prime minister that support will be provided to Northern Ireland consumers whether they use heating oil or natural gas is welcome.

“The Consumer Council is keen to see more progress in the development of support for consumers who primarily use home heating oil to heat their homes.

“This should be support over and above the additional payment of £100 to all households across the UK who are not served by the gas grid.”

But SDLP leader Colum Eastwood described the £100 heating oil payment as an “insult”.

“They have no idea what real people are going through,” he tweeted.

“The ⁦‪SDLP‬⁩ are proposing 1,000 litres of oil for households. Only radical action will protect families this winter.”

The broader scheme means energy suppliers in the North of Ireland will reduce bills by up to 17p/kWh for electricity and 4.2p/kWh for gas.

When the cap was announced for the rest of the UK, the government said it was expected to save the typical household £1,000 a year based on current energy prices from October.

Businesses in the North of Ireland are also being promised an energy cap similar to that which has been announced for the rest of the UK.

The Energy Bill Relief Scheme will offer discounts for all firms for six months from 1 October.

Hospitals, schools and other settings such as community halls and churches will also get help.

The North of Ireland is in a different energy market from the rest of the UK, so businesses here will get a scheme based on the same criteria and offering comparable support, but “recognising the different market fundamentals”.

Retail NI has said it is “hugely disappointing” that more clarity was not provided on the energy cap.

“Government needs to ensure that a clear date is provided for the introduction of the energy bill cap, a business rates holiday and VAT reductions to support local small businesses,” chief executive Glyn Roberts said.

Colin Neill, chief executive of Hospitality Ulster, said it was “simply unacceptable” that businesses in Northern Ireland do not yet have the full details of how support will be provided.

“We need urgent clarity on how these measures will be carried forward, thousands of businesses are on the brink with many concerned how they will get through the winter,” he said.