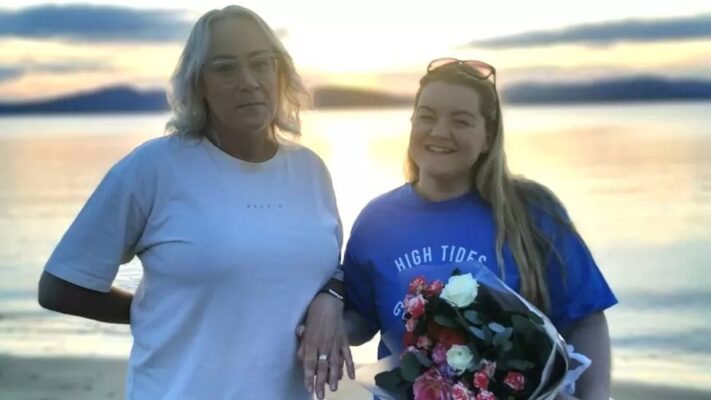 A Derry woman has spoken of her joy after her late father’s wedding ring was found by a metal detectorist.

Caroline Campbell vrom Galliagh lost the ring while out swimming at Ludden Beach in Donegal.

Despite extensive searches by members of her swimming group, the gold ring was nowhere to be seen and Caroline believed it was gone forever.

Speaking to BBC Radio Foyle, Ms Campbell said she was “completely devastated” when she lost the ring.

“The ring is so special to me, it’s hard to put into words how much it means,” she said.

Ms Campbell said the ring was lost on 12 July when she went down to the beach near Buncrana, County Donegal, in the Republic of Ireland with the Waves Mental Health Swimming Group.

“Everyone in the group was looking everywhere for it, some were even diving into the water trying to find it.

“It came a point when I just accepted that it was gone… it would be like finding a needle in a haystack.

“I thought it was gone forever and there was no way I was getting it back.”

Ms Campbell said she put on a brave face with the group, but said the gravity of losing something with such sentimental value really hit her hard when she came home and saw her mother.

“My mum was at home with my twins and I remember just walking in and it properly dawning on me and just being just completely devastated.” 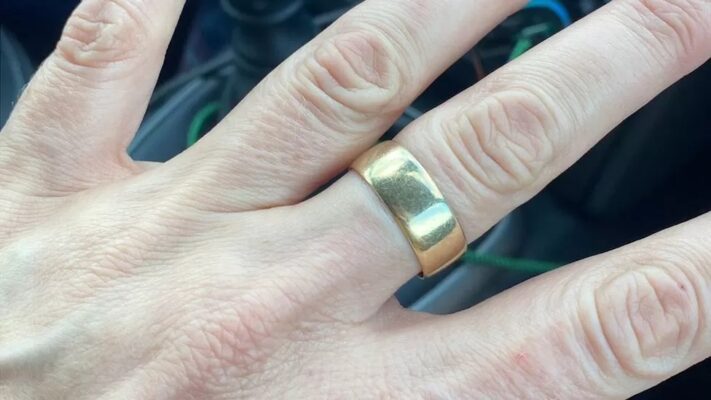 The ring was found two months after it went missing

Ms Campbell’s friend Charlie Smith then by chance came across a metal detectorist while walking on a beach in Derry’s Culmore.

She explained to Kieran Hegarty about her friend losing the ring a few months previously and he immediately offered to help.

Speaking to BBC News NI, Kieran said that he knew that particular beach would not be exposed to high winds or swells so it was likely the ring would not have moved far within the sand.

Mr Hegarty said he drove down that night and then again the following morning scanning the beach with his metal detector searching for the ring.

He said words could not describe the feeling he had when his detector went off and buried within about six inches of sand he discovered the gold ring.

Two months after losing the ring, Ms Campbell received a text showing the ring that Kieran had a found during his search of the beach. 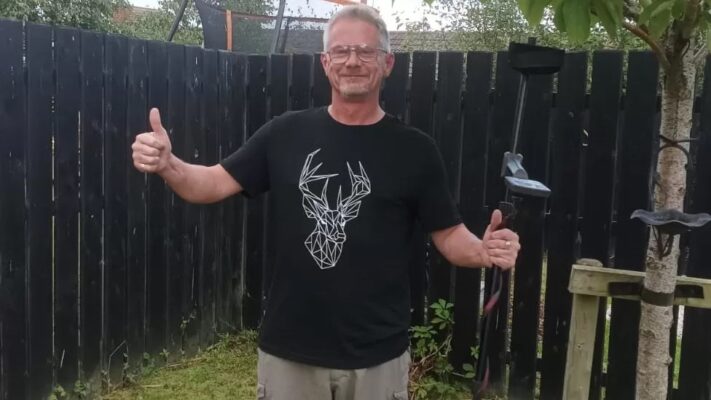 “The instant I saw the photograph I just broke down, I knew it was daddy’s ring and I couldn’t believe it.”

Ms Campbell then drove down with her mother to the beach to meet Kieran and retrieve her father’s wedding ring.

“I was so overcome with emotion that I could barely speak to him” she said.

Ms Campbell, who is “a self-confessed hugger”, said she instantly embraced Kieran after only just meeting him, and could not thank him enough for reuniting her with it.

Upon producing the ring, Mr Hegarty said: “Does this mean I have to marry you now?”

Mr Hegarty, who only picked up a metal detector as a hobby a year ago, said it was a truly special moment and was more than happy to help.

Ms Campbell said the ring is currently with a jewellers with the hope to restore it to its former glory.

“The ring is nearly 50 years old, this December would have been my mother and late father’s 50th wedding anniversary,” she said.

“The ring actually broke two days ago, but what the jeweller said was that had it been in the sand any longer it could have completely fallen apart and likely never been found.”

Ms Campbell said she is hopeful the ring can be fixed but said she is just happy to have “a piece of my daddy back at all, no matter the condition it’s in”.