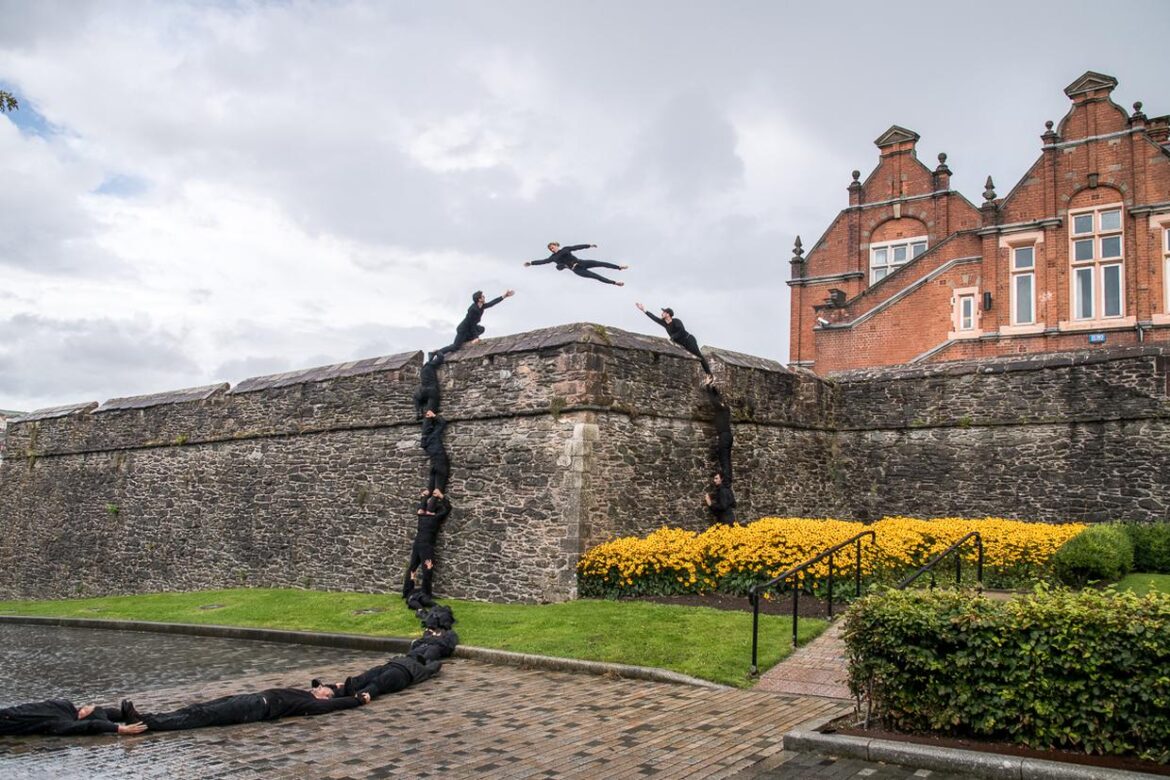 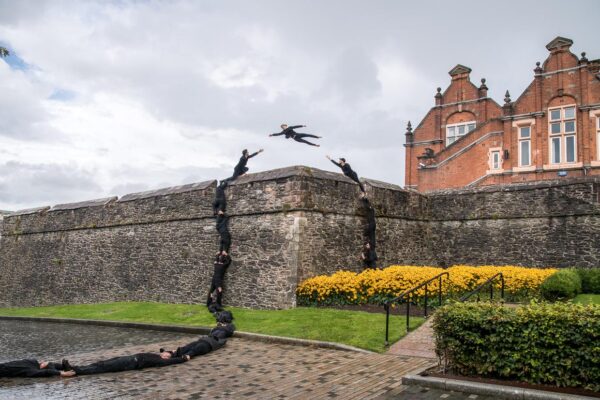 The French collective troupe of twenty world-leading acrobats toured the city and appeared in a number of locations throughout the week.

From the city walls and local parks to shopping centres and street corners, on the Cityside and the Waterside.

Compagnie XY first appeared on September 6 and continued to pop-up across the city, climaxing with a stunning performance called Le Grande Rendezvous in St Columb’s Park on Saturday, September 10.

People from Derry and visitors have shared special moments with the troupe, including being lifted, hugged and falling into their arms.

Each interaction has been a unique and special moment.

On Sunday the group, dressed in black ensemble, could be seen atop one another’s shoulders peering in the occasional restaurant window, to the surprise of customers and staff.

At one point a local barman came on to see what all the fuss was about on Ferryquay Street, only to be greeted by Frenchmen standing five-high who politely presented him with a sticker.

The project, Les Voyages – Derry-Londonderry is part of the IWM 14-18 NOW Legacy Fund, a national programme of 22 artist commissions inspired by the heritage of conflict, created in partnership with Imperial War Museums (IWM).

The performances this week began a year-long project where Compagnie XY will collaborate with In Your Space Circus, Circusful and local artists to create a new work for 2023 inspired by the achievement of Northern Ireland citizens in sustaining 25 years of the Good Friday Agreement.

Cian Smyth, Ulster University’s Arts and Culture Programme Manager said it has been “incredible” having one of the world’s best modern circus companies in Derry city and the island of Ireland for the very first time.

“We hope the year-long duration of the project will allow Compagnie XY and local artists to build a meaningful collaboration with each other and communities across the city.

“The collaborative effort hopes to explore the contribution citizens have made to sustaining a peace in the face of conflict,” he explained.

“Modern circus arts are different to what people historically expect of circus and this project has brought something people have never seen before, connecting some of the best circus performers in the world with those at home to create what has been a beautiful celebration of human resilience – of many bodies in public space overcoming obstacles and celebrating a place they love.”

Les Voyages – Derry is the 19th edition of Compagnie XY’s globally acclaimed project that has taken place in cities and towns from France to Denmark and Palestine to Serbia.

Antoine Billaud of Compagnie XY, said: “‘Nervous excitement’ is the phrase describing how we felt when we arrived in Derry city.

“We are having such a great human and artistic adventure in a one-year process involving local artists.

“This is a very unique opportunity that Cian Smyth through the IWM 14-18NOW Legacy Fund and Ulster University has offered us – to begin the first step of a whole community-based process with our Les Voyages performances rather than it being the objective in itself.

“So we arrived with this nervous excitement about a new adventure and sharing our vision of the universal gesture of “lifting each other up” with the people of Derry.”

Les Voyages – Derry-Londonderry has been such an inspiration for the local community, local circus artists and our many circus school participants, she added.

“It’s a very exciting time for Circus in Northern Ireland and the north west at the moment, and we are delighted that Compagnie XY has helped to keep up the momentum of celebrating and profiling our wonderful, diverse and powerful art form. 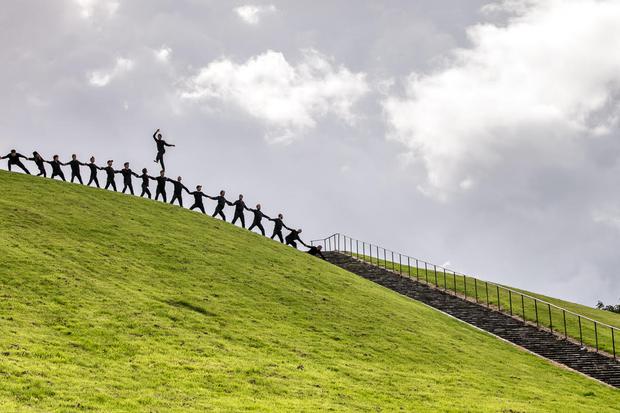 “We have loved watching how audiences reacted to the performances this week and we are looking forward to see how this visit inspires their work in 2023.”

The IWM 14-18 NOW Legacy Fund has been made possible thanks to the success of Peter Jackson’s critically acclaimed film They Shall Not Grow Old, co-commissioned by IWM and 14-18 NOW.

A share of the film’s royalties – £2.5 million – will see investment in artists and arts experiences as IWM partners with 20 cultural organisations and 22 artists from across the UK.

Dame Diane Lees, Director-General of IWM, said: “IWM is delighted to be working in partnership with Ulster University to mark 25 years of the Good Friday Agreement.

“Since the First World War, we have collaborated with artists to record the experiences of conflict in new and thought-provoking ways.

“The IWM 14-18 NOW Legacy Fund builds on this rich history by providing investment in artists and arts experiences across the UK and we are thrilled to now present the first of these landmark commissions with a new work from Compagnie XY.”