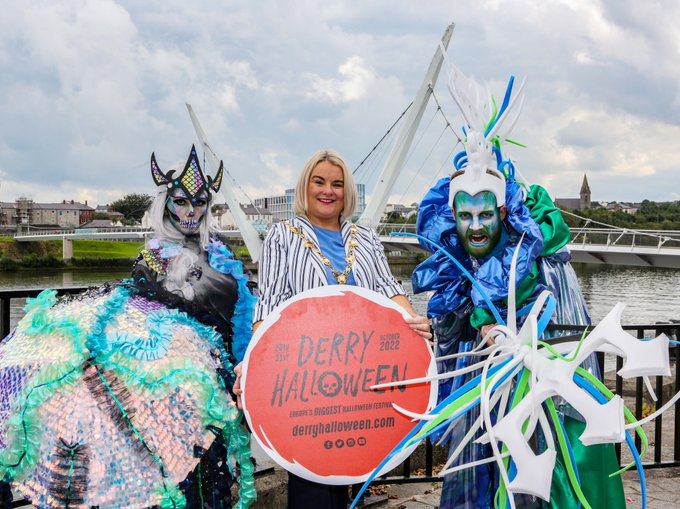 Derry’s Halloween Parade to light up the streets once again

Halloween revellers will be thrilled to hear that the annual Halloween Carnival parade will make a spooktacular return this year, with the launch today of Derry’s internationally acclaimed Halloween Festival.

The Mayor of Derry and Strabane, Councillor Sandra Duffy, joined some sinister characters from the underworld for the official launch when it was revealed that the huge on street carnival celebration would be making its comeback after a two year break due to the pandemic.

The Halloween parade traditionally involves hundreds of local performers, drawn from schools, clubs and groups right across the City and District, helping it to retain the community spirit that has always been at the heart of Derry’s world class festivities.

Making the announcement today, Mayor Duffy said: “When I heard that the parade would be back this year I was absolutely delighted.

“Last year organisers took the difficult decision to change the format of the event and extend the usual festivities across a wider area to allow for social distancing.

“The new approach worked really well and will be incorporated once again this year, with the addition of the traditional Carnival parade which really brings the streets to life and attracts tens of thousands of people to the City.

“I know the many groups who take part annually will be thrilled to don their costumes once again and take an active part in the event, which offers a platform for so many local performers.

“Preparations will be getting underway soon for what will be a fabulous night.”

Council will once again work with the North West Carnival Initiative (NWCI) to deliver the Carnival parade, with a series of performance, costume and prop making workshops set to commence in the coming weeks.

Today an open call has been made by North West Carnival to groups across the City and District who wish to participate in this year’s parade.

NWCI Project Manager Jim Collins said: “This is our first Halloween parade since Covid restrictions were introduced and everyone is really excited to be taking to the streets again.

“For anyone wishing to get involved they can message Jim via our Facebook page or emailing nwcarnival@gmail.com

“The parade’s theme ‘On the 9th Wave’ draws on the rich lore and legend associated with the Celtic festival of Samhain, it is beyond this wave that the spirit world can be reached.

“There’s something really special about Derry Halloween and it’s very much down to local people who go all out to make it their own.

“We’re always inundated with groups keen to take part and I want to open up that invitation today to all local schools, sports clubs, community and arts groups who want to showcase their talents and be part of the biggest Halloween celebration in Europe. Let’s make this the best Carnival Parade yet!”

Derry Halloween’s Awakening the Walled City event in 2021 was the city’s first major outdoor celebration since the Covid lockdown, and took the form of a magical trail taking in sites in both the Cityside and Waterside.

This year the extended programme will take place over four nights, with the Awakening the Walled City event animating the City Centre and St Columb’s Park for three nights, October 28th, 29th and 30th, followed by the official Halloween night celebrations on October 31.

There will also be a whole host of family friendly events taking place at the Guildhall this year with an extended children’s programme running throughout the festival, and lots more highlights still to be announced.

The Carnival Parade will bring the festival to a thrilling close on Monday night as some of the City’s finest performers bring the story of the 9th Wave to life, reawakening the river Gods for a fearsome display of magic and mayhem led by some of our most spooky spirits of the deep.

The celebrations will culminate in the Festival Finale fireworks with all eyes on the River Foyle for a deathly display of pyrotechnics.

As the final touches to the programme are put in place, Festival and Events Manager with Council, Jacqueline Whoriskey, said:

“Last year we faced the challenge of staging an event just as we began to emerge from the pandemic, which involved taking some creative approaches which we think worked really well.

“Since then we have delivered a number of successful events including our famous Foyle Maritime Festival, and we have learned so much along the way in terms of crowd management and responding to the needs of the public.

“The return of the Halloween Carnival Parade is hugely important to us as it has always been the element of the programme that gets everyone involved.

“It’s the highlight of our celebration and it really captures the imagination of both the performers and spectators. This year really will be special and we cannot wait to take to the streets of Derry once again.”

Derry Halloween is delivered by Derry City and Strabane District Council with support from Tourism NI, The Executive Office and the NW Development Office.

Further details of the programme will be announced in the coming weeks and you can follow all the developments on the Derry Halloween social media channels and at: derryhalloween.com