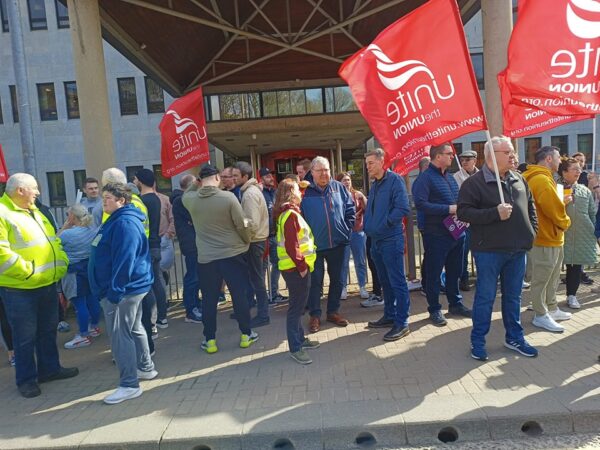 Council staff on strike in April this year over pay

Derry and Strabane District Council workers have voted in favour of a new pay offer and ended a threat of strike action, Unite the Union has said.

The trade union said workers at the council voted with a 63% majority to accept “a significantly improved pay offer” offer from management.

But members then suspended the action after receiving the new pay offer.

A spokesperson for Derry City and Strabane District Council confirmed that it had received notification that both main unions representing staff, Unite and Nipsa, have accepted the council’s pay offer.

Welcoming the ballot result, a spokesperson for the council thanked everyone involved in “successfully reaching a positive and agreed outcome to the process”.

They said the council remained “committed to good communication and engagement with all unions on all staff issues going forward”.

The threat of industrial action stemmed from a dispute over a local government pay offer of 1.75%, which the union had previously called a “real terms pay cut”.

The union had previously warned the industrial action could have “paralysed” council services, which included bin collections, over a four-week period.

“The pay deal includes a one-off payment of £500 and a fully consolidated two pay point increase worth approximately five per cent – on top of the wider National Joint Council pay improvement,” Unite said.

Mr Scott said council workers continued to work throughout the pandemic to ensure basic services for the public were maintained.

“Sadly these workers were left with no option but to strike to win a decent pay increase,” he said.

“Strike action is always a last resort and no worker enters into it lightly.

“This pay improvement demonstrates the unity and strength of our membership in Derry City and Strabane.”