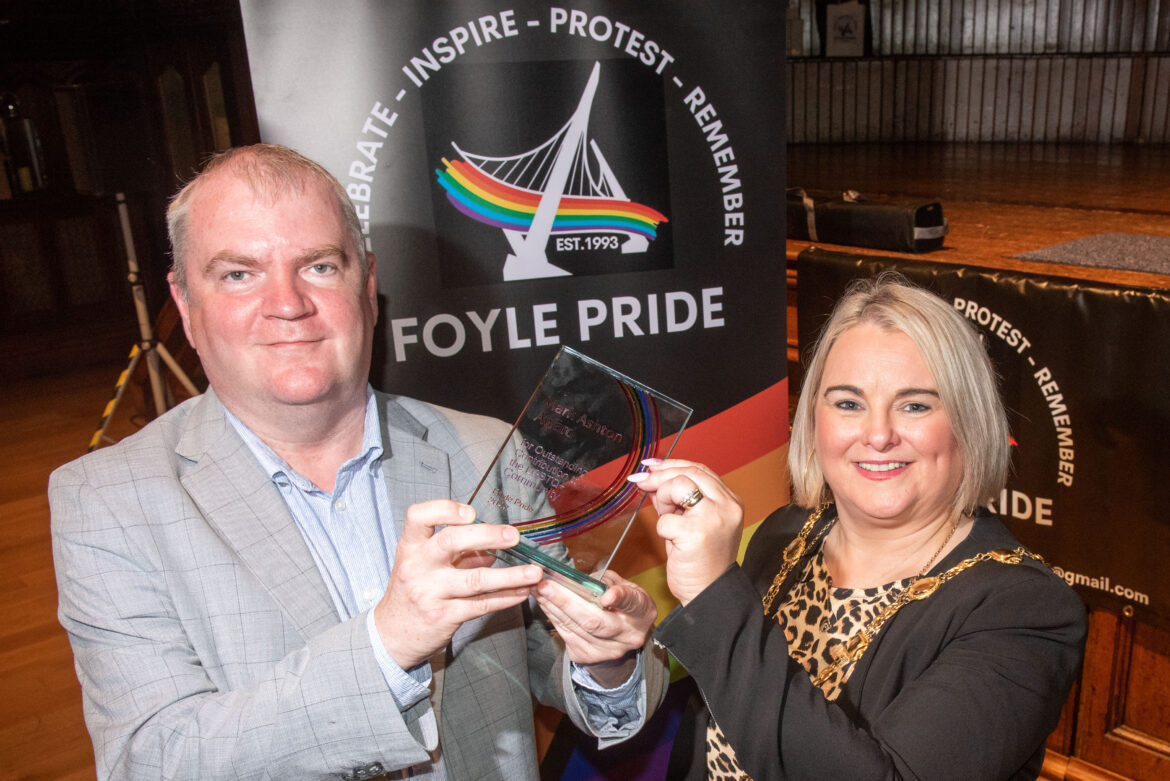 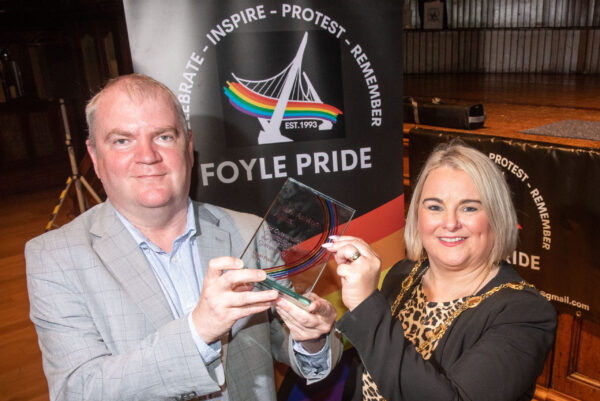 The Foyle Pride Festival was officially launched in the Guildhall this week.

The launch was held in conjunction with the Foyle Pride Awards, which recognise the work done by individuals to make a difference in the LGBTQIA+ community.

The event was compared by Michael Doherty, who was said he was “honoured’ to take part in the event.

Mayor of Derry City and Strabane District, Councillor Sandra Duffy, said: “I am absolutely so honoured and so privileged to be here tonight.

“We have been outside in parks for far too long. That has caused people a lot of anxiety, a lot of mental health issues so it’s brilliant that we can get back inside to support each other.

“I think that’s what Pride has always been about, supporting each other.

“I have been attending the Pride parade forever – for as long as I can remember – as a proud ally and I actually received an award a number of years ago, the Terry McCartney Award.

“That’s downstairs, it’s in the parlour, and it has pride of place in the office that I sit in every day. I was so privileged and humbled to have received that award.

“Everyone who has been nominated for an award or receives an award, you are amazing. Well done to you all.

“I just want to pay tribute to the Pride Committee, everyone in The Rainbow Project and everyone else who has been involved in organising events this week.

“It’s fantastic to have the parade back on Saturday and I absolutely can’t wait to get back there and see the flag and be part of it.

“I really can’t wait to get it all started. It’s been fantastic today to meet Kellie too and bring her down to one of out boxing clubs here.”

Boxing promotor and trans activist Kellie Maloney was the special guest for the evening.

She said: “Thank you very much for inviting me to your Pride. I think Pride is very important in helping bring communities together.

“Pride only happens once a year but we should take pride in who we are 365 days a year. We need to celebrate our existence, our friends and our relationships 365 days a year.

“Please do not be afraid to stand there and show people that we’re here. It’s a privilege to be who you are.

“It’s so important that people know that our community will always be here. We’ll always be part of the community.

“At the end of the day, we are all human beings. It doesn’t matter what your gender, sexuality, race or nationality, we’re all members of the same race – the human race. Tonight, it’s a great honour to see people get their awards but you should all be proud of yourselves tonight.”

Holly Johnstone from Hypixel Studios, who sponsored the event, said: “For those of you who don’t know who we are, we’re a game developer based on Patrick Street in the city centre.

“Our origins are in Minecraft, we come from the modding community but for us, Hytale’s all about immersion. It’s about immersing yourself in the community and being the true identity you want to be, whether that’s in the game or in reality.

“We encourage all players of all backgrounds and we have hundreds of thousands of modifications so people can be who they want to be for their community.

Lisa McGee was commemorated for writing ‘The Wee Lesbian’ Clare from Derry Girls and how her friends accepted her for who she is.

Lisa wasn’t there to collect the award herself but she sent a letter, which was read by Mayor Duffy. 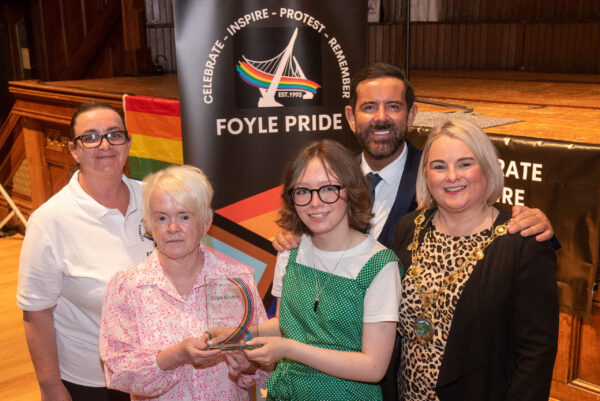 Lisa Wrote: “It is an absolute honour to receive this award in my home town and centre of the universe, Derry.

“Thank you so much, this means the world to me. Claire is such a special character for me and was a joy to write her coming out scenes and her first kiss.

“I will miss writing for her desperately. I hope you all have a wonderful evening, love Lisa McGee an Clare Devlin. Here’s to wee lesbians everywhere!”

Foyle PrideFestival takes place this week and there is a full programme of events which can be viewed on Foyle Pride’s Facebook Page.