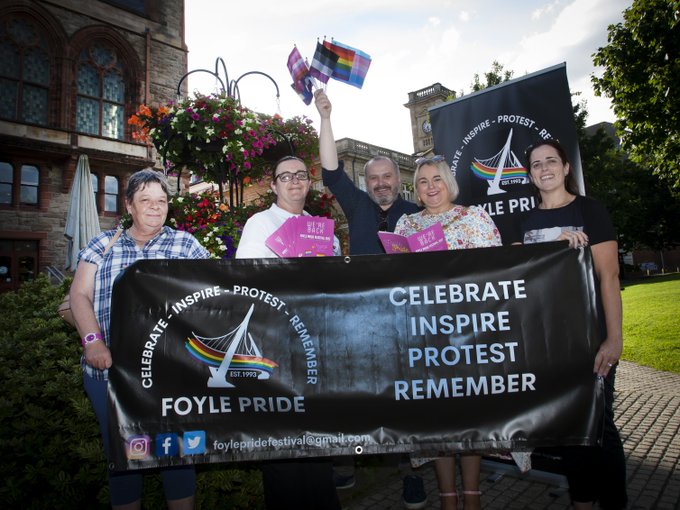 Mayor of Derry City and Strabane District Council, Councillor Sandra Duffy, said she is “delighted” this year’s Foyle Pride Parade is going ahead in its original format as part of the wider festival.

Details of the festival programme have now been confirmed as it was launched in Derry this week by Mayor Duffy and members of the Pride organising committee.

Among the events taking place will be the opening Foyle Pride Fun Day on Sunday 21 with inflatables, sack races, egg & spoon, penalty shoot out, welly throwing and more for free at St Columb’s Park running track from 2pm to 5pm.

On Monday August 22 at Brooke Park there will be Cake in the Park at Gwyn’s Pavillion at 2pm, followed at 7pm with the official launch and Foyle Pride Awards at the Guildhall.

On Tuesday, August 23 there will be Yoga with JoJo online via Foyle Pride Facebook at 9am, and a Health & Wellbeing Day at the Guildhall from 11am to 3pm, followed by Disco Fever for kids at the Centre for Contemporary Art at 5pm and the launch of an exhibition featuring an archive of material at Void Gallery at 6.30pm.

There will also be an Evening with Kellie Maloney from 7pm at the City Hotel.

Other highlights include the Big Pride Quiz at Bennigans’ Bar on Wednesday 24 at 8.30pm, Read With Pride Storytime at the Central Library on Thursday 25 at 11am and Pride Does Politics at the Playhouse the same day at 6pm.

Friday, August 26, will see an under 18s Guiseppe’s Ballroom music and socialising event at Cultúrlann Uí Chanáin from 5pm to 8pm, followed by an over-18s event from 8pm to 11pm at the same venue, as well as a Drag-It-Up competition event with Lady Portia Di Monte and DJ Bill X at Da Vinci’s at 8pm, admission at the door £5.

Kathleen Bradley, chair of the Foyle Pride Committee, said: “I’m thrilled at the line-up for this year.

“We have some very exciting personalities appearing throughout the week and I’m very grateful to them for coming to Derry, getting involved and helping us to keep Derry on the map as a haven for LGBTQIA+ community and culture.”

Mayor Duffy said: “I am looking forward to being part of the celebrations and to welcome people from all over our Council area to this fantastic celebration.

“I want to pay tribute to everyone involved in Foyle Pride, and for the excellent work they do to represent the local LGBT+ community and campaigning in solidarity with the global LGBT+ community.”