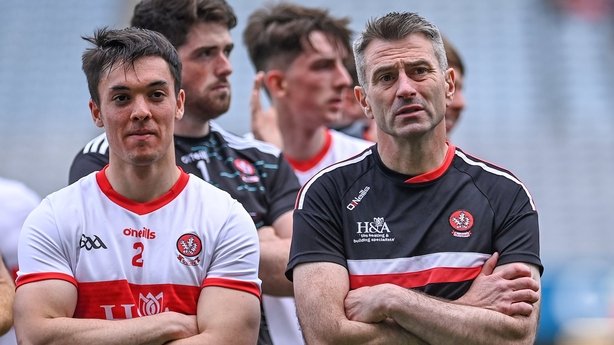 DERRY manager Rory Gallagher has said Galway will pose a major threat to his side’s ambitions of reaching the All Ireland senior football final.

The teams square up this evening at Croke Park in Dublin the semi-final with thousands of Derry fans making the long journey to Ireland’s capital to cheer on the Oakleafters (throw in 5.30 pm).

Gallagher’s forensic examination of Galway’s resources has led to him acknowledging that Padraic Joyce’s men have improved even further over the course of the few weeks since the sides met in the penultimate round of the Allianz League when Galway eased to a comfortable victory.

Right now, though, Gallagher is obsessed with turning the tables on the Tribesmen who last won the All-Ireland title in 2001, while Derry must go back to 1993 for their only acquaintance with Sam Maguire to date.

“I believe that Galway are much improved and have real quality and particularly in their forward line. I also think that Padraic Joyce has re-invented their full-back line — they now have better quality defenders and better ball players,” said Gallagher.

“The team boasts a settled midfield in Cillian McDaid and Paul Conroy and this is something that they have not had for a number of years.

“Kevin Walsh had them at a good level when he was manager and then they slipped back a little bit but Padraic and his management team have energised them. They are now a real forceful outfit.”

It was Galway’s ability to stay the pace in the second half against Armagh before emerging triumphant in a penalty shoot-out that made a big impact on Gallagher, who accepts that the Tribesmen can now raise their game further.

“They can go up another notch and this is something for which we must be ready,” added Gallagher.

In pinpointing what he sees as Galway’s new-found midfield strength, the astute Gallagher is nonetheless highlighting a sector in which his side could potentially still come out on top.

Gallagher’s detailed study of Galway’s plus points ensures he will send his team into battle this afternoon conscious that they must adhere to their game plan.

“We must get our movement going from the outset and try to maintain our pace,” added Gallagher.

If Derry succeed in their objectives, there will be no happier person in Croke Park than Gallagher.

Indeed, he makes no bones about what a win would mean to him.

“It would be massive, just massive,” said Gallagher. “It’s the ultimate honour to play in an All-Ireland Final. We are evolving into a top-level team. If we can fulfil our potential then I think we can enjoy lots of good days.”