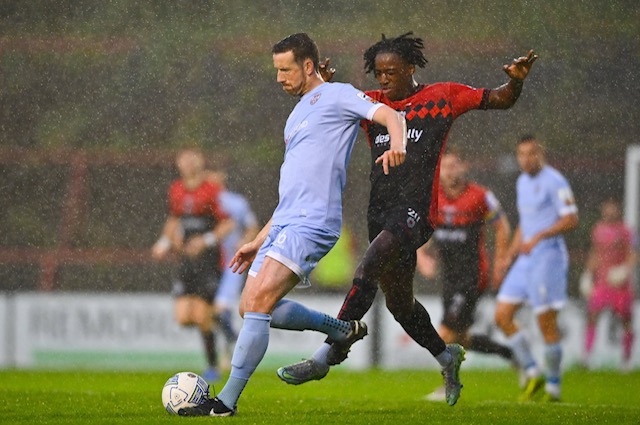 Derry City made it back-to-back Premier Division wins with a 3-2 victory over Bohemians at Dalymount Park tonight, Friday, July 1 (kick off 7.45 pm),

Joe Thomson put the visitors in front as they led 1-0 at the break.

Will Patching’s deflected free-kick gave the Candystripes a two-goal cushion and they held on for the three points after Dawson Devoy pulled one back with five minutes to go.

The Candystripes had entered May as league leaders, however, their title challenge has largely disintegrated after four draws and three losses over the past two months.

With an incredible eight victories in their last 12 games here at Dalymount, the visitors have enjoyed their trips to Dublin 7 in recent years and this was no different.

Bohs, for their part, have ample quality, but individual defensive mistakes – seen again in this clash – have kept them inconsistent and stuck hovering around sixth place.

The Gypsies looked an improved side during their narrow loss to Rovers last week, and they started this game similarly sprightly.

Relentless throughout, Omochere displayed his trickery to cut in from the left wing and lay off to Devoy for the game’s opening chance. However, the Ireland under-21 international struck his effort just wide on three minutes.

Starting with the league’s top scorer Jamie McGonigle on the bench, Derry had to wait until the 20-minute mark for their first sight of goal. Will Patching’s stroked free-kick, however, was comfortably punched away by Tadhg Ryan.

As the half wore away, so did both side’s defensive prudence. Pockets of space began to appear, as a string of superb saves kept the game scoreless.

Meeting James Akintunde’s cross, Danny Lafferty struck a flying volley, but Ryan was well positioned to deflect, before remarkably returning to his feet and shutting out Thomson’s rebound moments later.

Minutes later, it was Maher’s turn to produce the goalkeeping heroics as he used his feet to stop Omochere’s shot after a smart link up with Junior Ogedi-Uzokwe.

For all the good goalkeeping to that point, it was a poor mistake from Ryan that allowed Derry to take the lead.

Overestimating his ability to intercept a looping forward ball from Derry’s Caoimhin Porter, the 25-year-old net-minder found himself in no-man’s land as Thomson met the loose ball and lobbed it inside the empty net.

The second half started amidst a sweeping rain shower, as Bohs urgently sought an equaliser.

The hosts didn’t have too long to wait either, as Ali Coote’s strike from the edge of the box levelled proceedings just before the hour mark.

However, the celebrations had barely lasted a minute when Matty Smith extinguished the home stand’s joy.

Charging forward to meet a deep cross from Porter, the Scottish winger surged to the back post, before hitting a side-footed volley into the roof of the net.

And this time the celebrations couldn’t be dampened – the visitors notched their third goal 15 minutes later.

Probably the league’s best free-kick taker, Patching delivered the dead ball just off the right wing, which Devoy unwittingly headed past his own goalkeeper.

The goal was an unlucky one to concede, but Devoy made amends with five minutes to go when he smashed a stunning strike from 30 yards into the left-hand corner.

The Gypsies did everything to force even more late drama, but Omochere’s late chance was thwarted off the line by a resolute Derry defence.

Next up for Derry is an way clash on Friday, July 15 against North West rivals Finn Harps at Finn Park (kick off 7.45 pm).