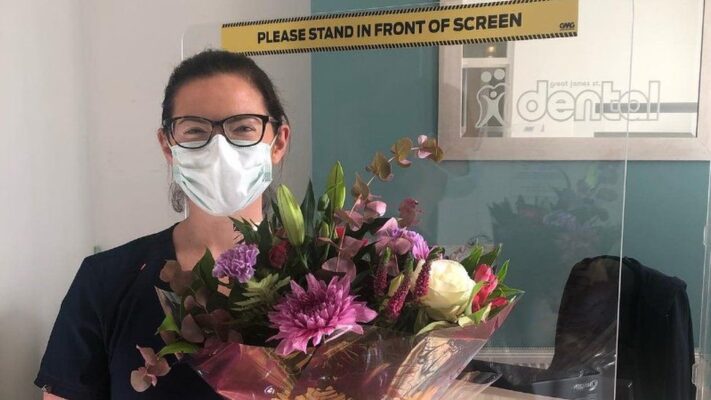 The dental industry is in “absolute crisis” in the wake of the Covid-19 pandemic, says a Derry dentist.

Meabh Owens, who owns a dental practice in the city, said the current system was failing patients in terms of wait times.

“My next available appointment slot is not until September to carry out treatment,” she said.

The dental practice owner said this was something affecting dentists right across the board in the north west.

“Things have gotten worse and the needs of people have increased,” the dentist told BBC Radio Foyle.

The Department of Health (DoH) said it was developing a dedicated scheme to improve access to dental care for unregistered patients.

Dr Owens said waiting times for patients – both NHS and private- were running into months and the time had come for the department to intervene.

“You may need three or four appointments and you have months in between each, and these appointments are longer because patients are requiring more care,” Dr Owens said.

“In an appointment slot for treatment, you might’ve historically been able to do four or five check-ups but those are the kind of check-ups we’re unable to get to now because we are now so bogged down.”

She said to make the NHS dental industry work, they need to see a “phenomenal amount of patients, but Covid has put a halt to all of that”.

Michelle Barrett, a mother-of-three in Derry, has said she has had ongoing issues trying to get one of her children registered with a dentist in the city.

“We have been trying to get my middle child a dentist for just over a year now,” Ms Barrett told BBC Radio Foyle.

“There are so many dentists where I live in the Waterside, but I have telephoned every single one of them and there is nothing available because there is such a backlog.

“This has now led me to register my child with a dentist in Limavady which is not really good for me because I don’t drive, and having to travel there with the two other kids is also quite difficult in itself.”

Ms Barrett said some dentists she rang did say they could offer a private appointment, but said due to the current cost of living crisis that is “simply not an option” at the moment because she cannot afford it.

Dr Owen’s practice cares for more than 12,000 patient and does not have the capacity to take on any more.

“There is a backlog of dental disease that we have had ramped up in the last few years,” she said.

“It feels like we are climbing a mountain and every time we climb up, the peak seems to be that bit higher and further away from us.”

Dr Owens said they needed more dentists in the NHS, but said “it is next to impossible to attract them” due to what she said were financial pressures entering the industry after graduating.

The Department of Health accepted that general dental services had been hit by the pandemic.

“It has been a difficult and challenging time for dentists and their teams, and for patients too, who have had to wait much longer than usual for treatment.”

The department had provided “significant financial support” to the industry during the last two years, it said in a statement.

“Most dental practices have significant backlogs of patients with unmet need which they are gradually working through,” it added.

The DoH said it was developing a dedicated scheme to improve access to dental care for unregistered patients, which it hoped would be piloted within months.

“Covid has been a wake-up call and dentists have had enough from the treadmill of high volume/low margin approach,” it said.

“Totally inadequate funding of dental services has left dentists worried for the future of the service, particularly those practitioners who are most NHS committed.

“Stress levels have soared. Morale has reached an all-time low, and dentists fear that Health Service dentistry doesn’t having a viable future.”