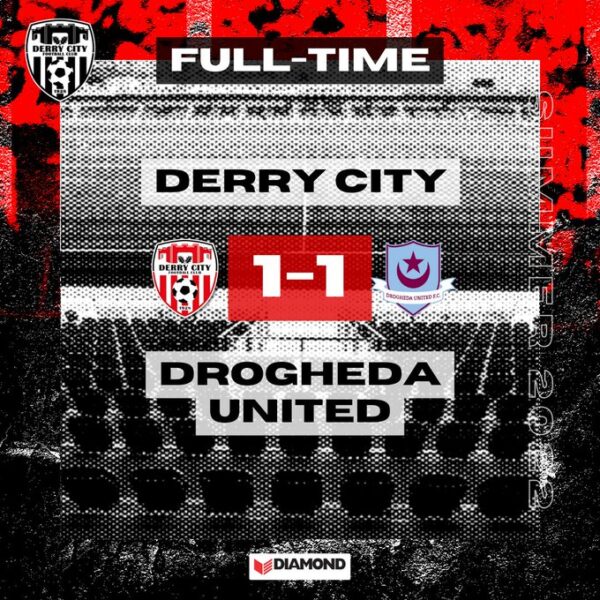 It was honours even at the Ryan McBride Brandywell Stadiun and Derry City have lost the chance to put more pressure on Rovers, thanks to a second-half equaliser from Drogheda.

The Candystripes remain in third place, eight points behind Rovers and three back from Dundalk.

City’s poor run of form continued, as Drogheda United came from behind to earn a point at the Brandywell.

After Matty Smith gave the home the lead, Kevin Doherty’s side started to come into the game after the break and Dean Williams levelled things from the penalty spot, as Patrick McEleney’s challenge on Ryan Brennan resulted in referee awarding a penalty.

City should have taken the lead on three minutes as Caoimhin Porter’s right wing cross found Jamie McGonigle at the back, but the striker completely missed his kick with the goal at his mercy.

With their tails up the home side continued to push forward and they went close twice in quick succession when firstly Cameron Dummigan’s header was cleared off and McGonigle’s follow-up shot was straight at McCabe and then moments later Will Patching fired inches over, after Smith had picked him out at the back post.

Derry deservedly took the lead on 33 minutes as McCabe did well to keep out McGonigle’s effort, but the keeper had no chance, as Smith fired home the loose ball from six yards.

The visitors got in behind the City defence on 61 minutes, but just as Williams was about to pull the trigger young defender Porter got back to make a timely challenge to divert the danger.

Soon after United had another opportunity but Brennan’s 20 yard strike, which although well hit, was straight at City keeper Brian Maher.

Drogheda levelled things on 77 minutes from the penalty spot as Williams side footed home, after referee Alan Patchell felt Patrick McEleney’s challenge on Brennan inside the box, warranted the spot-kick.

Derry should have regained the lead on 85 minutes as Shane McEleney’s right wing cross found McGonigle, but the striker headed over from close range.

Drogs nearly gifted Derry the winner in the closing stages as Georgie Poynton’s clearance fell to McGonigle, but his shot was kept out by keeper Colin McCabe.