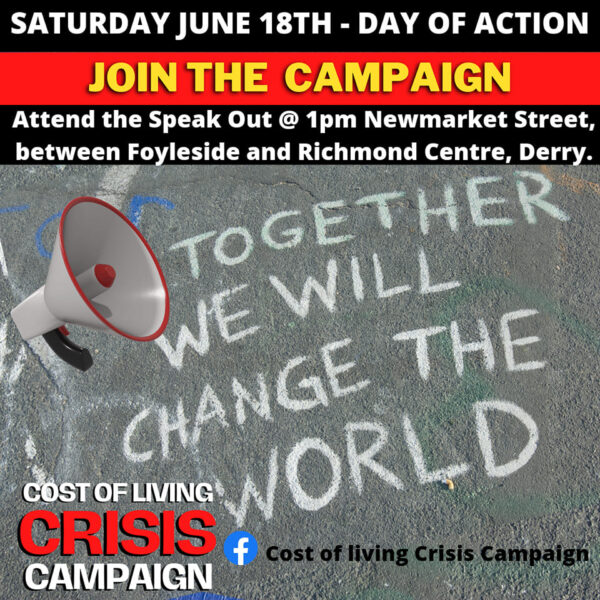 Cost of Living Campaign Action this weekend in Derry

A Day of Action on the Cost of Living Crisis is planned for this Saturday, June 18 in Derry, Belfast, Strabane, Coleraine, Enniskillen and elsewhere across the North, in conjunction with protests in London and Dublin.

The protests are demanding a range of immediate measures to tackle the cost of living crisis.

The Derry Cost of Living Crisis Campaign will be organising actions in local communities this Saturday morning followed by a short protest at 1 pm at Newmarket Street (by Millennium Forum) in the City Centre.

“The cost of living crisis that is pushing ever increasing numbers of people into hardship is showing no signs of abating. Government action continues to lag well behind what is needed or, in the case of Stormont, is virtually non-existent”, said a spokesperson.

Saturday’s events will be followed by a march and rally on Saturday, June 25 at Stormont organised by the Irish Congress of Trade Unions and backed by the Cost of Living Crisis Campaign and many others.

The pre-pandemic and pre-cost-of-living crisis statistics for poverty and low-pay in Derry means that people here are being disproportionately impacted by rising prices for energy, food, housing and other essential costs.

There is simply no excuse for hundreds of millions of pounds to be sitting in a Stormont bank account when so many people across our communities are so desperately in need of help.

The spokesperson added: “We urge people in Derry and elsewhere to join the June 18 Day of Action in their own towns and to get on one of the many buses heading to the June 25th Cost of Living Crisis rally on Stormont.

“We need to maximise pressure for pay and benefit increases in line with inflation along with price caps on essential costs, increased taxation on the super-rich and energy companies.”