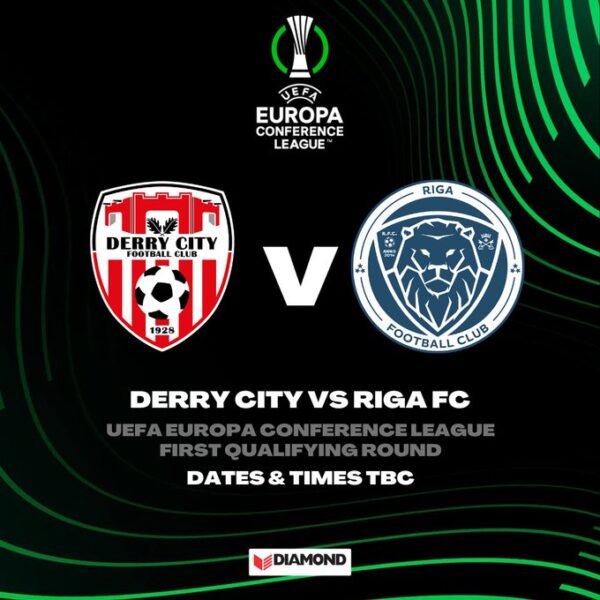 DERRY City FC have been drawn to play Riga FC in the first round of the Europa Conference League.

Also in the Europa Conference League, Sligo Rovers were paired with Welsh side Bala Town FC. They were defeated by Larne in last year’s competition.

Derry and Sligo will play their matches on July 7 and July 14. Times have yet to be confirmed

Shamrock Rovers will play Hibernians of Malta in the first round of the Champions League qualifies following the draw in Nyon this morning.

The Hoops were seeded going into the draw but still had the likes of Lech Poznan as potential opponents.

Hibernians were the weakest side on paper they could have faced and the Premier Division league leaders emerged first from the pot, followed by the Maltese champions.

Their best-known clash with an Irish side was when they beat Shelbourne two decades ago.

Last year they saw off opposition from San Marino in the first round of the Europa Conference League before exiting to Riga FC of Latvia in the second round.

Prior to that, in the Champions League, they face Flora Tallinn and were defeated 5-0 over two legs.

Flora went on to beat Stephen Bradley’s side in a Conference League play-off.

Northern Irish champions Linfield also had fortune on their side for their draw in the Champions League.

As an unseeded club, they were paired with Welsh champions The New Saints, avoiding more difficult opposition like Bodo/Glimt and Malmo FC.