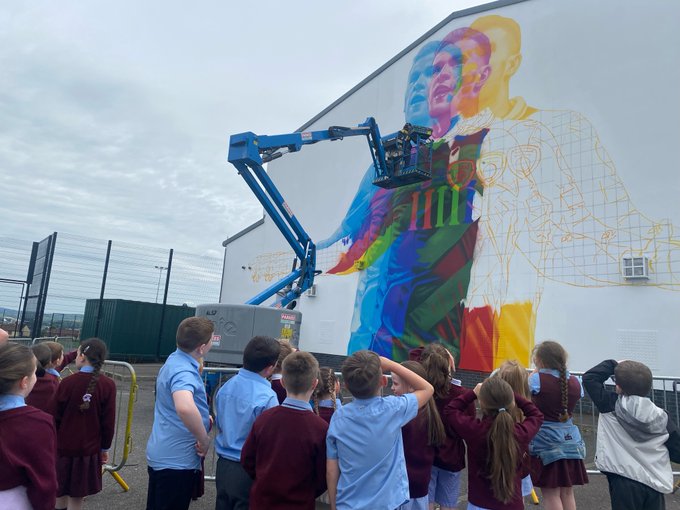 A NEW mural in honour of James McClean in Derry towers over Creggan where he spent his childhood kicking about a football.

The mural at Central Drive in Creggan is part of Feile Derry’s ‘Graffiti On The Walls’ project.

Students from St. John’s Primary School, the school the Republic of Ireland international attended, called by to see artist Aches hard at work on his new mural celebrating one of Creggan’s sons.

McClean honed his skills on the streets of Creggan and went on to pull on the famous candystripes for hometown club Derry City FC.

He got a move across the water where he has played for Sunderland, West Brom, Stoke and Wigan where he has been given a one-year extension for the 2022/2023 season.

The Derry man represented the Republic of Ireland, collecting 90 caps and captaining the side against Mexico.

The Dublin-based artist behind the mural, Aches, specialises in large scale murals and graffiti.

Aches has been invited to design and create original artwork for projects around the world, in countries such as Denmark, Hungary, Spain, Sweden, Scotland, Austria, Switzerland, England and USA.

‘Graffiti On The Walls’ is a new street art initiative across the Brandywell and Creggan neighbourhoods which has featured workshops and a number of new murals for the area.

The Gasyard Feile is a community festival.

It has become the biggest community and arts cultural festival in the North West, attracting over 20,000 people to the programme of events.

The Feile is the result of the commitment of a multitude of groups, initiatives, volunteers who come together each year to shape and manage a programme of events that range from music, literature, sport, education, visual arts, carnival and fun days to health, discussions, lectures, conferences, community consultation and tours.