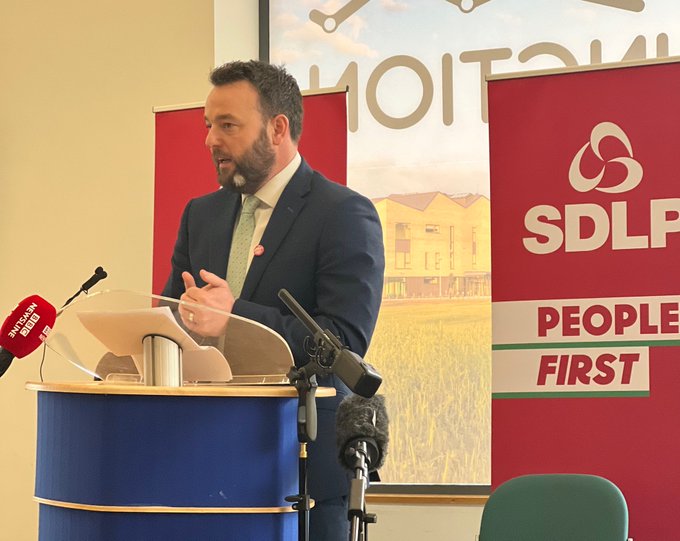 SDLP Leader Colum Eastwood has written to the leaders of Stormont parties urging them to back emergency legislation that would empower Ministers to allocate hundreds of millions in unspent resource to address the cost of living crisis.

The Stormont cash cannot be spent as a result of the collapse of the Executive but the SDLP sponsored legislation aims to amend the law to give a group of Ministers acting together the power to implement a new energy costs scheme to help struggling households.

Colum Eastwood has also written to the British and Irish Governments outlining the route to implement the new legislation, which requires the nomination of a Stormont Speaker.

Said the Foyle MP: “Every month families across our communities are dealt another blow by energy companies announcing a new raft of price hikes and tariff increases that are squeezing people beyond their means.

“We have passed breaking point for many households where parents have accepted that they will have to turn off the radiators to make sure they can put food on the table.

“It is a damning indictment of our politics that while people sit cold, hungry and afraid of what the next set of price hikes will mean for their family, that Stormont is sitting on hundreds of millions in unspent resource that could help people.

“I have already said that the SDLP will form a constructive opposition to the next Stormont administration.

“We will not stand on the sidelines as things go wrong. We will step up and step in to address the huge challenges families here are facing.

“That’s why I have written to the leaders of Stormont’s parties asking them to back our emergency legislation to give Ministers the power to get support to people who need it right now.

“That will mean supporting the nomination of a Speaker at Stormont to get this legislation on the floor of the Assembly.

“Uncomfortable as I accept that will be for the DUP Leader, it’s time to make a choice.

“Jeffrey Donaldson can choose to continue with the politics of protest and boycott, focussed on challenges over which we have no direct control, but we must all be clear that the price of that protest is cold homes, hungry children and parents at their wits end.

“It is a price we would never consent to.

“SDLP MLAs will meet with Stormont’s Bill Clerks this week to advance our proposal to get money into the pockets of families that desperately need it.

“This is a challenge that is breaking people in our communities but the solution is very simple, it just needs political will.”