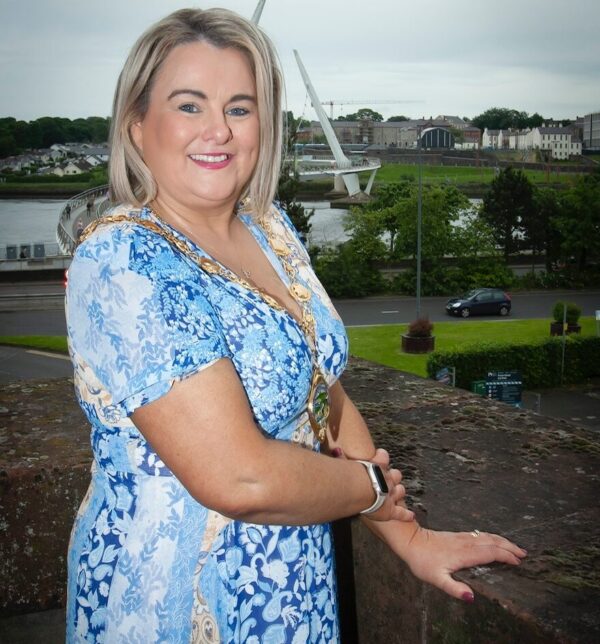 Derry City and Strabane District Council tonight elected a new Mayor to represent the City and District for the incoming 2022-23. Sinn Fein’s Councillor Sandra Duffy accepted the Mayoral chain from her predecessor the DUP’s Alderman Graham Warke at the Council’s Annual meeting held at the Guildhall.

The new Mayor, who will be supported in her role by Cllr Angela Dobbins from the SDLP, who takes up the position of Deputy Mayor, said she was deeply honoured to represent the City and District and vowed to represent everyone.

She said her main commitment during her Mayoral year would be to represent all the people of the Council area with a special focus on tackling the cost of living crisis and doing all she can to help local communities and families at this difficult time.

Outgoing Mayor, Alderman Graham Warke handing over the Mayoral chain reflected on his busy term and extended his heartfelt thanks to the people of the City and District for their friendship and warmth over the past year.

He particularly acknowledged their support of his Mayoral Charity Foyle Down Syndrome Trust in raising over £50,000 and extended his best wishes to the new incoming Mayor and Deputy Mayor saying he hoped the year ahead would be a great success.

Newly elected Mayor, Councillor Sandra Duffy said she was deeply honoured at being chosen as Mayor and promised to represent everyone during her Mayoral year. She spoke about her passion for the city and district and the people who live here and vowed to be a “Mayor for All.”

She said she was excited to work with her colleagues at Council to deliver real change for ordinary workers and families across Derry and Strabane.

She vowed to tackle the cost-of-living crisis and invest in our communities and do all she can to support workers and families who are struggling to heat their homes and put food on the table.

She said: “As a local Council, we must do everything possible to support people. Derry and Strabane has huge potential to grow and thrive, for the city and district to be a great place to live, work and socialise, we have exciting times ahead.

“I will work to continue the transformation of the city, to grow the local economy and boost tourism by supporting our local businesses to create jobs. To ensure that the next generation has a future here.”

The Ballyarnett elected representative said she was very much looking forward to the role as Mayor and to meeting and speaking with people right across the city and district over the next year to hear their opinions at first hand, as their views are hugely important.

She confirmed that her chosen charity for the year was First Housing Aid & Support Services and how she was keen to work with the organisation to help raise funds to support the work they do to support families and vulnerable people who find themselves without a home, particularly people battling challenging circumstances through addiction and mental health.

She added that she planned to work with the charity to set up a fund for people who are exiting homelessness and setting up a home to help them with costs of buying fuel, electricity, and furniture.

Extending a special thanks to her family and party colleagues for their ongoing support, Mayor Duffy paid special tribute to her husband Kevin for being a tower of strength to her over the years and for encouraging her to avail of this unique opportunity to become First Citizen.

Concluding she thanked everyone for their messages of support and said she was looking forward to working alongside her Ballyarnett councillor colleague and Deputy Mayor Cllr Angela Dobbins in the year ahead. 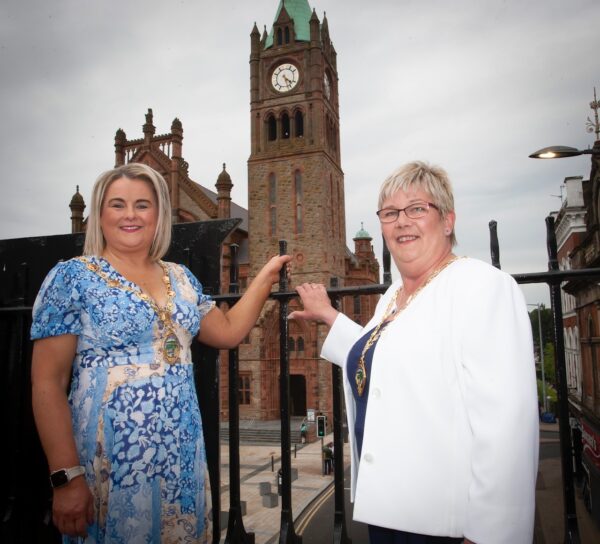 Deputy Mayor, SDLP Councillor Angela Dobbins, in her acceptance speech also spoke about the honour of representing the City and District.

She said she hoped to use the year as an opportunity to shine a spotlight on some of the many causes close to her heart and spoke about her commitment and advocacy work in campaigning for public safety and environmental issues.

She said: “Throughout my time on council I believe I have built a reputation as a public representative who wants to work with and for everyone.

“I think we are at our strongest and at our very best when we come together to deliver for Derry and Strabane.

“That’s the spirit of partnership I want to bring to this role as I embark on my year as Deputy Mayor and I trust my council colleagues will work with me to ensure it’s a success.

“I believe Derry City and Strabane District Council is blessed to have two strong women at its helm.”