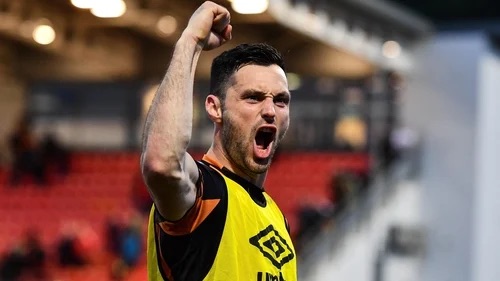 Unlucky Derry go down 2-1 to Dundalk

Derry City were unlucky not to beat Dundalk who took all three points after a battling display in their SSE Airtricity League Premier Division clash at the Ryan McBride Brandywell Stadium (kick off 7.45 pm).

After taking an early lead thanks to Robbie Benson’s strike, James Akintunde came off the bench to level things, before Pat Hoban won the game in the closing stages.

However, the game was marred in the closing minutes as some of the Dundalk back-room team and players got involved in a few incidents with Derry supporters.

Dundalk, who started the contest the better opened the scoring on 10 minutes in sublime fashion, as Robbie Benson’s outstanding long-range effort, flew past Brian Maher into the keeper’s bottom right hand corner.

A slick passing move by the home side 16 minutes saw Brandon Kavanagh find Jamie McGonigle down the right wing and his clever cross found Joe Thomson, but the midfielder’s shot from 10 yards was pushed around the post by Nathan Sheppard.

Just after the half-hour mark Benson had a glorious chance to double the lead, but the ex-St Patrick’s Athletic man fired wide when the ball fell perfectly to him inside the box.

Sheppard was called into action soon after as the young Dundalk keeper held Thomson’s spectacular over-head kick, after Ronan Boyce’s high right wing cross had found the midfielder inside the Dundalk penalty box.

City boss Ruaidhri Higgins changed things around just after the hoiur mark with striker James Akintunde coming off the bench to replace defender Boyce, as Derry pushed forward for an equaliser.

Akintunde levelled things on 75 minutes as Kavanagh’s teasing right wing free-kick found the Londoner and he made no mistake, diving in to head home from close range. Dundalk regained thre lead on 82 minutes as substitute John Martin picked Kavanagh’s pocket on the edge of the box before playing in Hoban and the striker made no mistake from actute angle.

The vistiors celebrations lead to an altercation with some Derry supporters and in the end boss Stephen O’Donnell was given his marching orders by referee Rob Harvey.

In the closing minutes Patching went close with a long range free-kick but Sheppard gathered the effort.

Right at the death the woodwork came to Dundalk’s rescue as this time Patching 20 yard free-kick, which had Sheppard beaten, came crashing back off the crossbar.