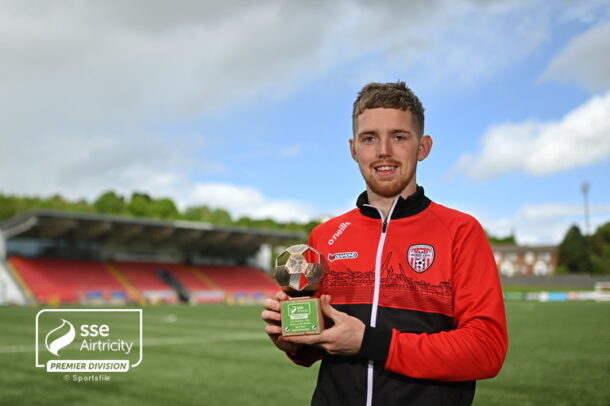 written by cassoscoop May 12, 2022
ShareTweet

Jamie McGonigle of Derry City receives the SSE Airtricity / SWI Player of the Month for April 2022 at The Ryan McBride Brandywell Stadium in Derry. Photo by Ramsey Cardy/Sportsfile

The 26-year-old striker, who was signed from Crusaders last June, currently tops the Premier Division scoring charts with nine for the season.

He hit five goals in April, including a hat-trick against UCD, as the Candystripes went toe-to-toe with defending champions Shamrock Rovers in the title race.

“I’m delighted to win,” McGonigle said. “It’s good recognition for the month that I’ve had and the goals that I’ve scored.

“Some of the nominees that were there, the quality of players, I am delighted it was me who was selected.

“The hat-trick against UCD helped massively as I was on a drought. It’s not that I wasn’t playing well but I just wasn’t scoring goals so that gave me my confidence back. I then got another two against St Pat’s the following week.

McGonigle is the first Derry City player to claim the monthly award since Barry McNamee back in April 2013.

“I knew about it [the stat], but that wasn’t something I was worried about,” he added.

“I was just trying to concentrate on my game. Thankfully, I’ve won this time and hopefully it’s not the last.”

Andy Lyons of Shamrock Rovers finished second in the voting, with McGonigle’s team-mate Will Patching third.

City are back in action on Friday evening, May 13, when they travel to the Tallaght Stadium to take on Shamrock Rovers (kick off 7.45 pm).