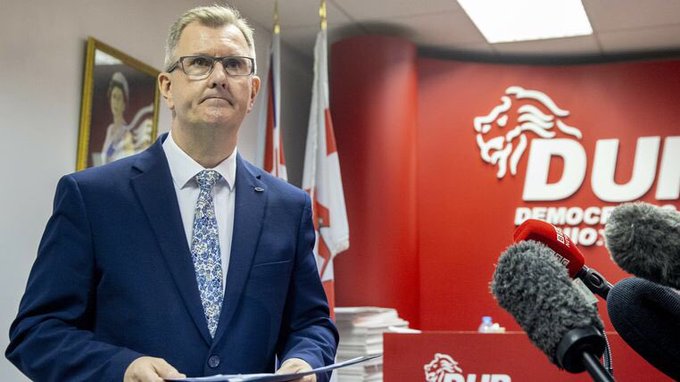 Donaldson: We will not nominate ministers so long as Protocol remains

The DUP will not re-enter the Stormont powersharing Executive without “decisive action” from the UK Government on the Northern Ireland Protocol, Sir Jeffrey Donaldson has said.

The DUP leader is resisting pressure from other parties and the UK and Irish governments to nominate ministers for a new Executive following a dramatic election result at the weekend which saw Sinn Fein emerge as the largest party.

MLAs returned to Parliament Buildings on Monday and party leaders were also holding separate meetings with Secretary of State Brandon Lewis about the future of the Stormont institutions.

It came as Prime Minister Boris Johnson said he does not plan to be personally involved in the Northern Ireland talks and Downing Street played down reports of a Cabinet rift over the protocol.

Speaking following his meeting with Mr Lewis in Belfast, Sir Jeffrey said: “We have had a meeting this morning with the Secretary of State and we have made our position clear to him.

“It is the position we have held before the election, throughout the election campaign and will continue to hold, and that is until we get decisive action taken by the UK Government on the protocol we will not be nominating ministers to the Executive.

“We want to see stable political institutions, we want to be part of the Executive, we want to play our part and fulfil the mandate we were given by the people of Northern Ireland.

“We are also clear given the damage and harmful impact the protocol continues to have on Northern Ireland, driving up the cost of living, harming our economy, impeding the ability of businesses to trade with our biggest market and fundamentally undermining political stability, undermining the principle of consensus politics.”

The DUP leader added: “We need this to be resolved.

“When we re-entered the Executive back at the beginning of 2020 we did so on the basis of a clear commitment by the UK Government under the New Decade, New Approach agreement to address and protect our ability to trade with the rest of the United Kingdom.”

The centre-ground Alliance Party made significant gains in the election, increasing its seat count by nine to 17, becoming the third largest party at Stormont behind Sinn Fein and the DUP.

Leading her enlarged team into Stormont on Monday morning, Ms Long told the media they were turning up for work as they had promised voters during their election campaign.

“I want us to sit down, get the negotiations under way on the programme for government and the budget, and I want to see us getting government up and running as quickly as possible,” she said. 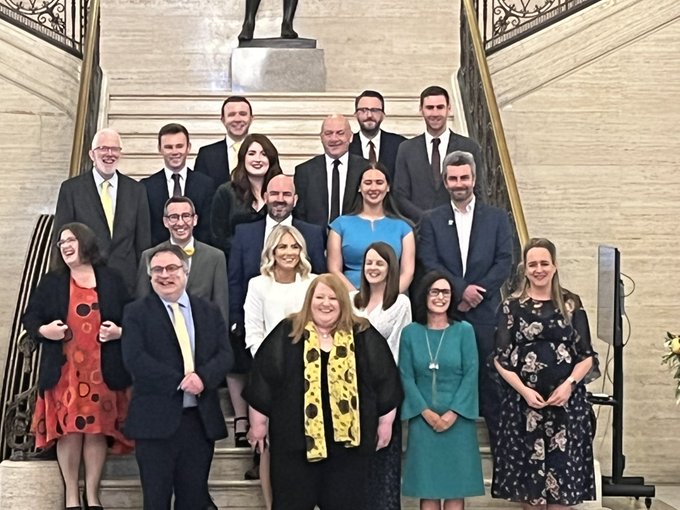 “We’re going to see a functioning Assembly hopefully pretty soon – that will be the easier part of all of this – but to get a functioning Executive we need the DUP to step up to the plate. With power comes responsibility, and people now need to take the responsibility seriously.

“I think the DUP need to reflect on their mishandling of Brexit, on the fact they had huge influence at Westminster and overplayed their hand.

“It would be foolhardy for them to overplay their hand with devolution because that is a gamble that Northern Ireland can’t afford to take.”

Ms Long was also critical of statements by government ministers that the Northern Ireland Protocol is threatening the Good Friday Agreement and preventing formation of government at Stormont.

“What is threatening the Good Friday Agreement is the British Government not playing an open hand with the people of Northern Ireland, using and abusing the protocol as an issue to try to garner support for their own cause,” she said.

“I think it’s time for the UK Government to resume its role as an honest broker in this process, to be open and honest with the people of Northern Ireland, with the political parties about what is possible and what is not.

“Ultimately this is Boris Johnson’s baby, the protocol was birthed on his watch. There is no point in telling us now it’s a disaster – it’s up to him to provide solutions, and those solutions have to be agreed with the European Union because that is the only thing that will bring certainty and clarity that business needs.”

Mr Eastwood said his party will not nominate a minister to replace Infrastructure Minister Nicola Mallon who her seat because his party does not have a mandate.

He said: “We know who got the mandates, we will support them when we have to, we will also hold them to account, but they should get on with it today and form a government.”

The Stormont Executive has been unable to fully function since February when First Minister Paul Givan resigned as part of the DUP’s efforts to force action against the Northern Ireland Protocol.

This means Sinn Fein’s Stormont leader, Michelle O’Neill, is in line to become the first nationalist or republican First Minister.

However the DUP, as the second largest party, must nominate a deputy First Minister to serve alongside her in the joint office.