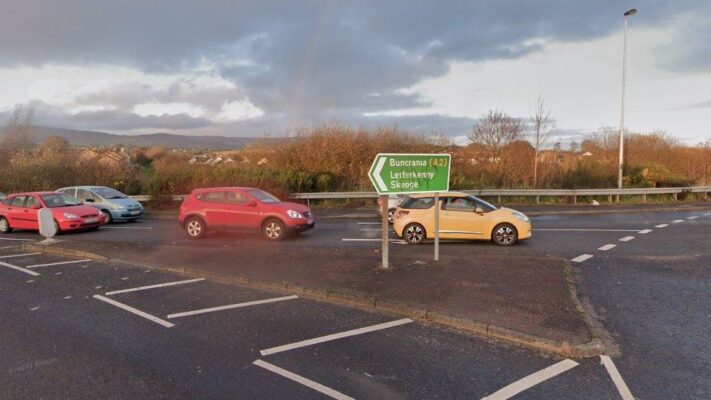 A man has been remanded in custody after being charged with attempting to inflict grievous bodily injury by dangerous driving on a police officer who was allegedly carried on the bonnet of a car for 30 metres in Derry.

Adam McMonagle (28), with an address in London, appeared at Derry Magistrates’ Court charged with a series of offences that were said to have occurred on Monday of this week.

A PSNI officer connecting McMonagle to the charges.

Bail was opposed and the officer explained to the court police, who were on patrol on the Skeoge Link Road, saw an Audi car travelling at speed on the other side of the carriageway.

As police turned to follow, they noticed traffic was stalled and saw the driver of the Audi talking to the driver of another car.

As police approached, the driver got back into his vehicle.

In a bid to stop the car moving off, one officer struck the driver’s window with his baton breaking the window on the second strike.

The Audi took off and struck that officer and another officer who was in front of the vehicle had to jump onto the bonnet.

The court heard that the vehicle went ‘faster and faster’ with the officer clinging to the bonnet and travelled for some 30 metres before the officer threw himself off resulting in him suffering bruising, cuts and grazes.

The court was told police spoke to the other driver and he said he had pulled out at a junction and the Audi had been approaching at speed.

The driver said the Audi had pursued him and the driver had got out shouting at him and he had locked the door as he was ‘fearful and scared.’

Police were given a description of driver and were able to trace the car which was registered to McMonagle.

The car was found abandoned and there was a box of beer in the front seat.

CCTV from a nearby shop was checked and the Audi was seen in the car park some hours previously with McMonagle entering the shop and remaining there for 20 minutes.

The court heard he appeared unsteady on his feet.

McMonagle handed himself in to police and made largely ‘o comment’ interiews.

Defence counsel Stephen Chapman said it was ‘significant’ that while McMonagle was arrested for attempted murder that charge was not being proffered.

Judge McElholm said he believed that the case would be going to the Crown Court.

The barrister said this client claimed he was having a psychotic episode at the time and remembered nothing.

The judge said if the defendant suffered from psychotic episodes like this then ‘he was not fit to be on the streets.’

He said these were a ‘very serious set of offences with immediate custody being the only outcome.’

The judge added: “To drive off at speed with someone clinging to the car is putting life at risk.”

Saying McMonagle was “a danger to the public”, Judge McElholm remanded him in custody to Maghaberry Prison to appear again on Thursday, May 26.