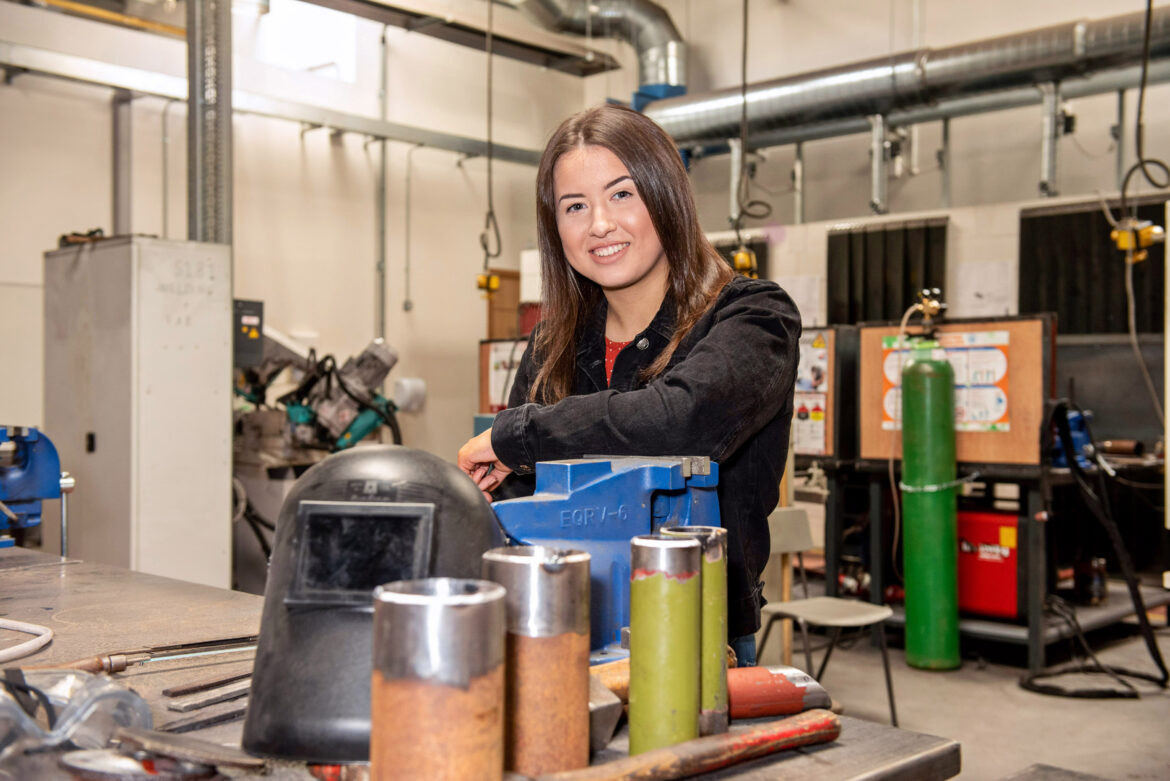 Bright spark Chloe is Apprentice of the Year finalist 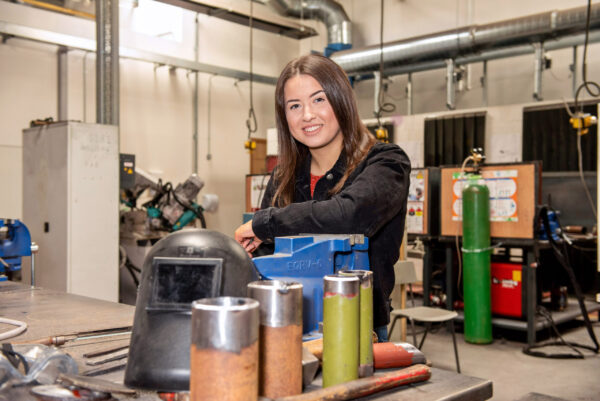 Chloe Rankin, 19, who is studying for the Level 3 Apprenticeship at NWRC’s Springtown has been shortlisted as a finalist in the ‘Insider – Made in Northern Ireland’ Apprentice of the Year Award 2022.

A North West Regional College (NWRC) Apprentice who is the only female welder working alongside a team of male welders at Fleming Agri Products, has been shortlisted as a finalist in the ‘Insider – Made in Northern Ireland’ Apprentice of the Year Award 2022.

Chloe Rankin, 19, who is studying for the Level 3 Apprenticeship at NWRC’s Springtown Campus, has worked with her college and employers to promote careers in welding to women and young people across the North West.

And she’s delighted to have made the final three in the Apprentice category of the awards which recognise and reward the excellence of the manufacturing sector in Northern Ireland and showcase the successful achievements of innovative and forward-thinking businesses across the whole region.

Her employer, Fleming Agri, has also made the top three in the Manufacturing Apprenticeship/Training Scheme Award category.

Chloe said: “People are always surprised when they hear what my job is. Seeing the shock on their faces never gets old, but everyone thinks it’s class that I’m a woman welder.”

“I like being hands-on when I’m learning and working. My experience has been good working as an apprentice, I couldn’t see myself doing anything else.

“I don’t think things would have gone as well for me if I’d gone down the strictly academic route as I wouldn’t be the biggest fan of sitting in a classroom all day, every day, and I like having a bit of freedom when working.

“An apprenticeship is a great route for your career as you are learning a new skill but also getting the experience while getting paid.

“I chose NWRC because I’ve always heard good reports about it. I applied for welding as I always had an interest in engineering as I had done it in school. At the Open Day, there was no problem with me being a girl looking to do the course.

“My employment with Fleming has been great, they’ve always supported me. They happily gave me a chance and took me on knowing that I was going to be the only girl working out in the factory.”

Lecturer at NWRC, Justin Sterritt, who nominated Chloe for the award described her as an “outstanding example to young women everywhere”.

He added: “Chloe is fully committed to her role and is driven to become an exceptional welder. She is not afraid to get stuck in at work, is confident in her abilities, and has shown she is as capable, if not more capable in some areas, to do the job.

“Her skills at welding have bloomed over her time at Fleming Agri and she is now capable of the toughest of jobs, working on her own initiative wherever possible and needing the minimum of supervision.

“Chloe has proved to be an excellent welder whilst at the same time excelling in her college studies.”

Jonathan Lecky, Managing Director at Fleming Agri said: “As a major employer of welder/fabricators, Flemings Agri has supported apprenticeships for many years, and we currently employ fifteen NWRC apprentices.”

“Chloe is a committed welder who works with great enthusiasm to become the best that she can be in her chosen field.

“She’s always eager to learn new skills and works on her own initiative and when faced with problems, calmly works towards satisfactory solutions.

“She is an inspiration to other young women considering a career in Welding or Engineering.”

The winners of the awards will be announced at a special lunchtime event taking place at The Titanic Hotel, Belfast next Friday, May 13, 2022.

Applications are now open for Apprenticeships at NWRC beginning in September 2022.

For more information and to apply online go to: www.nwrc.ac.uk/apply