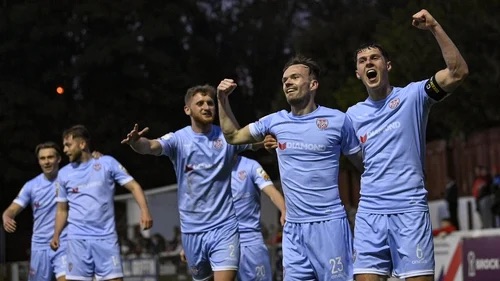 What seemed a 50-50 game became a massacre by the interval as City, league leaders, made a total mess of St Patrick’s Athletic before a shellshocked audience in Inchicore, the visiting fans realising they were watching perhaps the best Derry City side there has been.

A three-goal lead at the break flattered Pat’s. “Half time. The score doesn’t lie,” posted Saints’ Twitter account. It would get worse. The game was long over.

Shamrock Rovers look very hard to dislodge as champions but no performance so far this season matched that of the Candystripes on a lovely night in Dublin.

Matty Smith made a mockery of his self-admitted worries that he hadn’t scored yet for Derry by netting a fifth-minute opener that preceded two Jamie McGonigle goals before the break that made him hot favourite to finish top scorer this season, while Eoin Doyle at the other end – who netted for fun in England – cut a struggling figure. The game’s most outstanding player, Cameron Dummigan, made it four.

Far from Doyle being the only laboured marquee Saint, Chris Forrester was also lost, the hosts befitting a confident five-a-side team in an Astro tournament who met cocky outsiders they expected to be good, but nothing like this.

It was a bloodbath. Derry have stumbled on playing Dummigan in midfield; it could be the making of them – it certainly is of him.

Patrick McEleney was the player he always promised to be when injuries are not an irritant. Saints need new blood to even ensure a place in Europe next season on this evidence.

Tim Clancy’s men were behind on just four minutes.

Smith, who bemoaned his lack of goals in the media this week, showed no lack of confidence to prod home after a beautiful pass from Brandon Kavanagh – new housemates, both off-season signings by Ruaidhri Higgins.

Derry had the ball in the net again on seven minutes but the linesman had his flag up, their players pleading that the ball came off a Saints defender.

City were utterly dominant, Kavanagh flashing a shot wide as the hosts struggled to get on the ball.

A desperate mistake from previously outstanding Joe Redmond allowed Will Patching in, 14 minutes in; it was unexpected how he fluffed his strike.

Billy King flashed a ball across the box to nobody on 28 minutes; it was the best the Saints had produced.

Derry’s second was more than deserved. McEleney turned and twisted on the edge of the box, Patching found Smith, whose ball across the box was fired home by McGonigle.

Dummigan was utterly pivotal for Derry and, after uncharacteristically losing the ball, he won it back and found Kavanagh, who dinked into McGonigle, who made no mistake three minutes shy of the break. 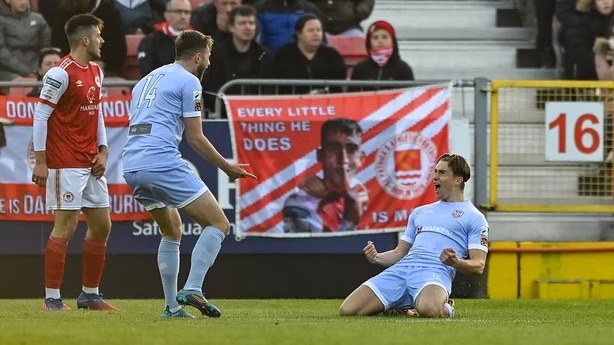 An offside flag ruled out a Derry fourth from a corner after the restart. When King turned back in the box seven minutes in, who intercepted him but Kavanagh, the modern Wes Hooligan of the league – which shows what this Derry City team has become.

On 61 minutes, the goal Dummigan deserved was realised in beauty, his inch-perfect curler after Patching passed it back showing he’s perhaps the most underrated player in the league.

It seemed things couldn’t get worse for Pat’s but they did on 83 minutes as substitute Ronan Coughlan went off carrying what seemed a bad injury. The Derry fans were still singing.