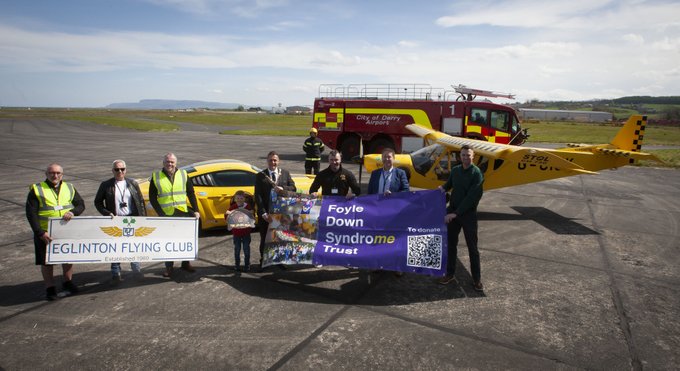 Teaming up to raise funds for Foyle Down Syndrome Trust

Many of the finest Super Cars and Muscle Cars in Ireland will take part in a tour of the North West this Bank Holiday Weekend in a special event to raise funds for the Foyle Down Syndrome Trust.

The Bear Run 74 will begin at Applegreen in Lifford this Saturday April 30th at 9am and take in Derry, Inishowen and Donegal on a two day tour that will allow car fans to get up close to the impressive vehicles.

To date the Bear Run 74 initiative has raised €36,440 for 10 different charities and Mayor of Derry City and Strabane District Council has thanked the event organisers for selecting his charity for his year in office for the latest event.

“On behalf of the Foyle Down Syndrome Trust I would like to thank everyone at the The Bear Run 74 for choosing my charity to be the beneficiaries of this exciting event and to Applegreen who are generously sponsoring the fuel,” he said.

“I’ve attended some of the previous events and some of the vehicles on show have been breath taking, if you are interested in cars this is a brilliant opportunity to see some of the best cars in the world so I’d encourage you to get involved.

“The last event in Lifford last September raised over €10,000 for the Donegal Hospice which is a phenomenal amount of money for one day, I’d appreciate if those in attendance this weekend can donate what you can and there is an option to donate online if you can’t attend.”

While the VIP visit to City of Derry Airport is sold out there are a number of events which are open to the public over the two days.

The Bear Run will start at Lifford Applegreen at 9am on Saturday 30th April before the cars travel in convoy to a VIP event at City of Derry Airport at 11am and a run to Applegreen Carndonagh at 2pm.

From there they will travel via Buncrana to Wild Ireland animal sanctuary in Burnfoot at 4pm before finishing the day in Downings at 6.30pm.

On Sunday morning they will begin at Downings at 10.30am before a Photo stop at the Poisoned Glen and lunch in Mountain Top Letterkenny at 12.30pm.

They will be at Halfway Karting at 2.30pm and finish at Downings at 6.30pm.

You can get updates and further information from the Bear Run 74 on their Facebook page of the same name.

You can donate to the Mayor’s Charity the Foyle Down Syndrome Trust at: derrystrabane.com/mayor