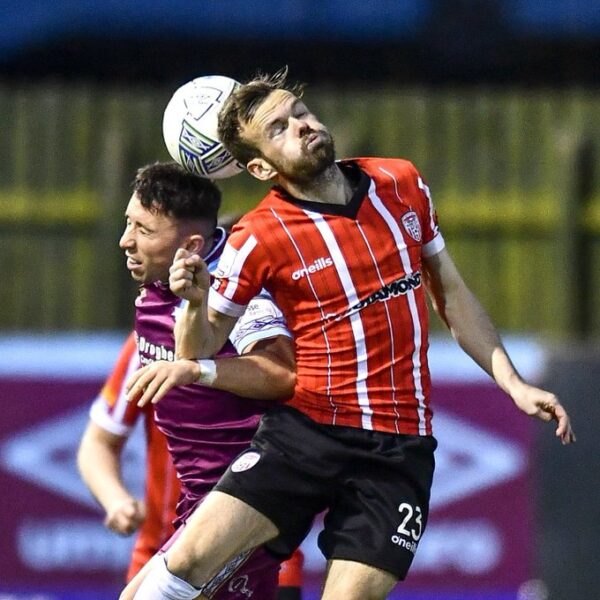 Derry City’s lead at the top of the League of Ireland Premier Division table is now a slender one point after a 1-1 draw at Head in the Game Park in Drogheda on Monday evening.

That’s five points dropped in the last two games for the Candystripes after a home defeat last week to
Shelbourne.

Joe Thomson’s ferocious drive gave City the lead but his goal was cancelled out by Ryan Brennan’s header with five minutes remaining in the first half.

The Candystripes penned their hosts in for the majority of the second period, but failed to find a winner after their 2-1 loss at home to Shelbourne on Friday night.

Ronan Boyce’s header on 84 minutes crashed back off the post as Drogheda survived to stay seventh.

Meanwhile, consecutive wins over Easter weekend for Shamrock Rovers has reduced Derry’s lead at the summit to a single point.

Away trips to Drogheda haven’t proved rewarding for Derry City in recent times.

Their 1-0 defeat at Head in the Game Park back on the 24th of October was their most recent defeat until their 14-game unbeaten run was brought to halt by Shelbourne on Friday evening.

City won the reverse fixture 2-0 back in March but they have managed just one win in the league at the Drogs in their last six trips since 2014.

Luke Heeney had the first meaningful effort for either side but his shot was safely gathered by Derry keeper Nathan Gartside while Cameron Dummigan dragged his attempt wide at the other end.

On 31 minutes the deadlock was broken when Thomson found a yard on the edge of the area and rifled low past Sam Long into the bottom left-hand corner to put the visitors in front.

Long did superbly to deny James Akintunde from close range five minutes later and it proved pivotal as Drogheda found an equaliser at the other end off the head of Brennan.

Derry had won each of their last four away fixtures prior to tonight but their hosts have enjoyed a five-game streak without defeat since their loss at the Brandywell last month.

On 62 minutes, City’s Matty Smith was threaded through on goal but he was charged down by Long who got enough on the ball to force it off target.

Drogheda almost stole in front themselves after withstanding an attacking barrage when Dayle Rooney’s sweetly struck volley was repelled by Gartside while Boyce thought he had won it for the Candystripes only to see his header crash off the upright as the game ended 1-1.

Next up for City is a home tie at the Ryan McBride Bride Brandywell Stadium this Friday evening, April 22 (kick off 7.45 pm) against bottom of the table side UCD.