Residents in the Waterside area of Derry have raised safety concerns over an unfinished housing development.

The Dunfield Residents’ Association has held a series of protests at the site and are due to meet Derry City and Strabane District Council later this month to discuss its concerns.

The group said it had been “inundated with complaints” about anti-social behaviour at the Dunfield site.

Some residents are now calling for the derelict buildings to be demolished.

The group claims that building work stopped at the site three years ago.

“We have seen them engaging in substance use, we know of two young people who have been taken to hospital,” Ms McCall said.

“We are frightened that this is going to continue until someone is seriously injured or worse.”

“It’s a disgrace and I am afraid someone will get killed,” resident Jane Dunlop told BBC Newsline.

“Those buildings are very dangerous,” she added.

Margaret Flynn, from the Dunfield Residents’ Association, said the site was once a popular spot for the community to gather in the summer months. 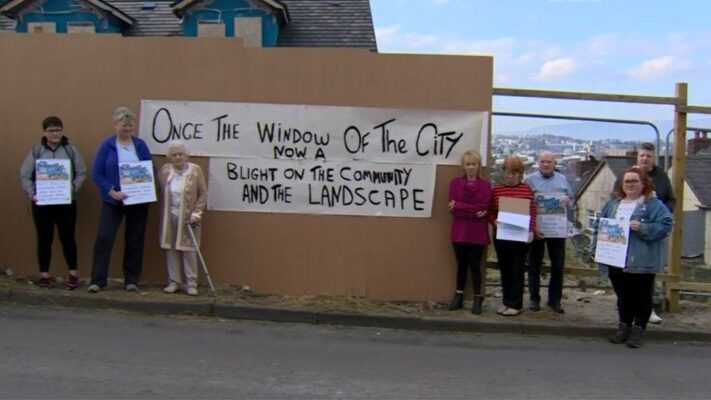 “The front was always a green space for people to actually go and sit down on the summer seats and enjoy life, but now it’s a disaster,” she said.

“The police, the ambulance and the fire brigade, they are never out of the place.”

The PSNI said it has “responded to a number of reports in relation to the site” in the Waterside area.

Inspector Spence has said that officers from Waterside Neighbourhood Team have responded to reports concerning “anti-social behaviour, criminal damage and concern for safety”.

“These reports involve young people who are coming to the site at anti-social hours and drinking alcohol. We’re also aware of concerns around drug use in the area,” the officer said.

Insp Spence has said he supports calls from the community for the anti-social behaviour to stop and urged those involved in this type of activity to think of the consequences of their actions.

In February, members of Derry City and Strabane District Council approved the serving of a legal notice on the owners of the stalled Dunfield development.

The council notice requires the owners to either secure the site, or demolish the partially built properties.

If the owners do not take the required action, the council will initiate legal action against them.