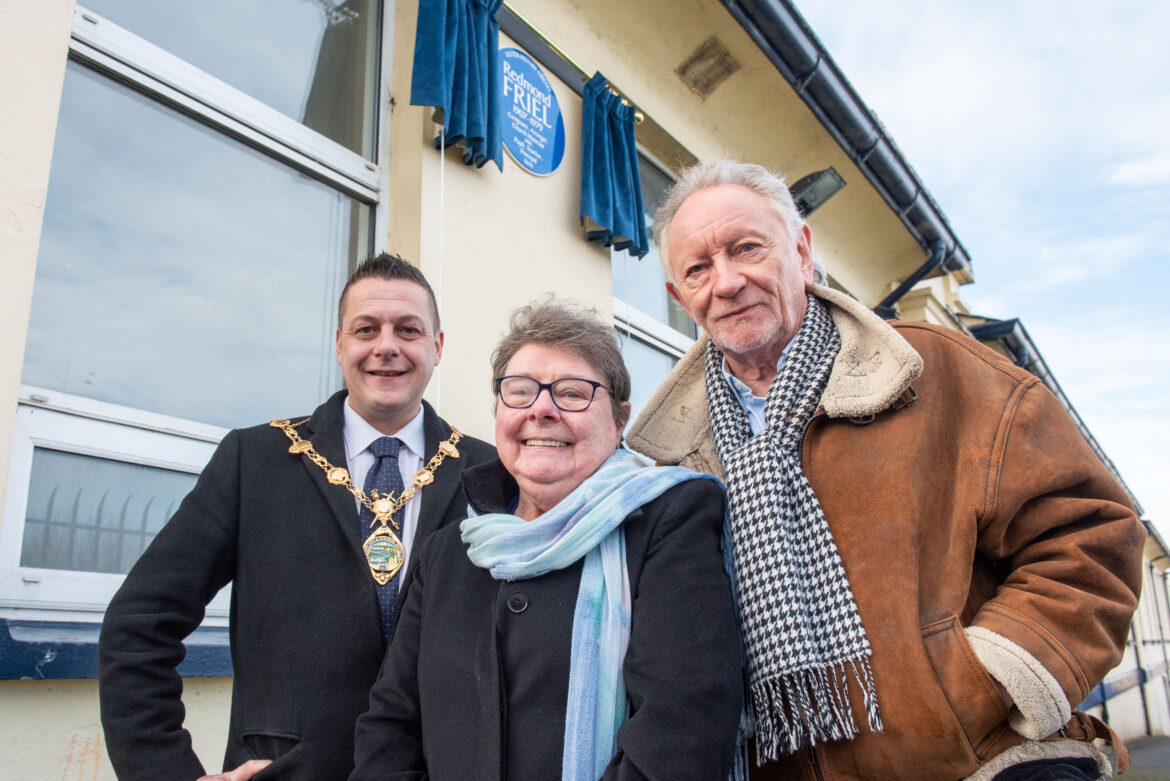 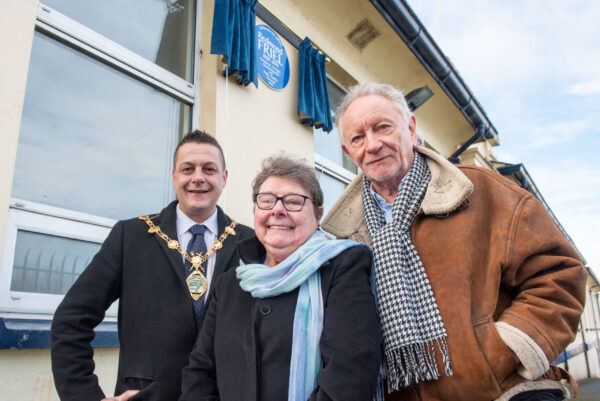 A BLUE plaque was unveiled at the weekend to a former Derry school principal and music teacher regarded as one of Ireland’s most prolific and gifted composers.

The family of Redmond Friel were joined by Mayor of Derry City and Strabane District Council, Alderman Graham Warke.

Internationally-renowned local musician Phil Coulter – one of Mr Friel’s past pupils – and invited guests attended the unveiling ceremony at Chapel Road Primary School in the Waterside area of the city which he attended as a boy and where he later became principal.

Describing Mr Friel as being ‘one of the most prolific and gifted Northern Irish composers of the 20th century,’ Derry-based musician, teacher and writer Nuala McAllister said he was an outstanding church musician, choral conductor and inspired arranger of Irish traditional melodies.

She said: “His interest and love of Irish music spanned over 65 years and when he died aged 72 in 1979, he left behind a musical legacy, which is unsurpassed.”

Born in February 1907 in Duke Street in Derry’s Waterside to parents Michael Friel and his wife Sarah Donaghey, from a very early age he was introduced by his parents to Irish traditional music. 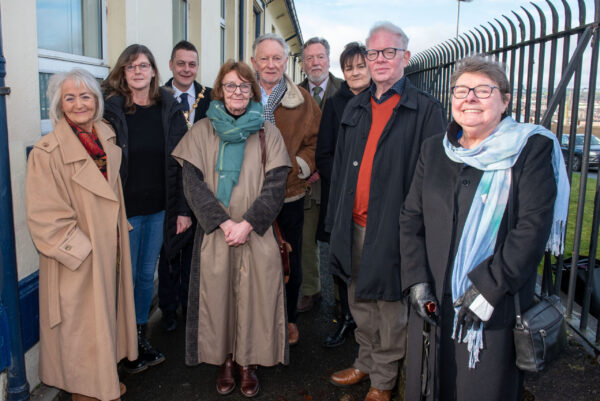 Educated at Waterside Primary School, now Chapel Road Primary School, by the time he had reached his teenage years, he could play the piano, cello, organ, clarinet and was a member of Waterside Brass and Reed Youth Band.

He showed great promise as a composer and won several prizes at The Oireachtas for his youthful compositions. To further his musical talents, he was privately tutored in Belfast by composer, Norman Hay, a lecturer at Queens University, before coming to the notice of Hamilton Harty from whom he received much encouragement.

Choosing a career in education, he left Ireland to travel to London where he gained a teacher’s diploma with credits in music and mathematics, but decided to return to his native city where he was appointed assistant teacher at the school where he had once been a pupil.

During the following years, he gained the reputation as a choirmaster, organist, outstanding composer, arranger and adjudicator, as well as being an excellent teacher to his pupils at Waterside.

As a choirmaster, he had associations with several local choirs and as conductor of the GPO Choir in the city, he was able to make several BBC radio broadcasts.

The Foyle Singers performed many of his arrangements of Irish songs. From 1930-1975, he was organist and choirmaster at Waterside’s St. Columb’s Church. 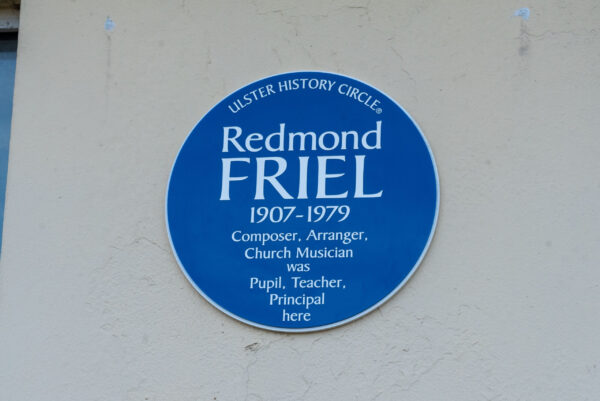 “Among his major orchestral pieces were ‘Symphonic Movement’ (1949) and a ballet and concert suite on ‘The Children of Lir’ written for the Cork Ballet Festival in I950.

“Later in life, in I968 he composed the music for the film ‘Two Hours From London’ to a script written by John Hume.

“Throughout the island of Ireland, his reputation as an arranger was widespread, and his orchestration of traditional Irish melodies for orchestra and choirs led to another engagement with BBC, when his arrangements were then broadcast on the popular ‘Irish Rhythms’ radio programme.”

In addition to the above impressive list of musical achievements, he became known for his talents as an adjudicator at music festivals throughout the Island – in Donegal, Dublin, Sligo and Cork.

Closer to home, he was a founder member of the North West Music Society and the North West Arts Festival, and served for over 20 years on the executive committee of the Feis Doire Colmcille.

He composed a ‘Choral Scena’ for its I977 jubilee celebrations.

His ‘Mass for Columb,’ composed for the centenary celebrations of St. Columb’s College six months earlier, was performed at his funeral in St. Columb’s Church on Chapel Road where he had been organist and choirmaster for so many years. He was laid to rest in Altnagelvin Cemetery.

The man who was a school principal, organist, choir-master, outstanding composer, arranger and adjudicator, is remembered by his former pupil at St. Columb’s, retired Head of Music at RTE, Cathal McCabe, who said of his music teacher: “He was an awful nice man.”

Chris Spurr, chairperson of the Ulster History Circle, said Mr Friel was an ‘outstanding’ composer and arranger who shared his love of music with many pupils over the years. 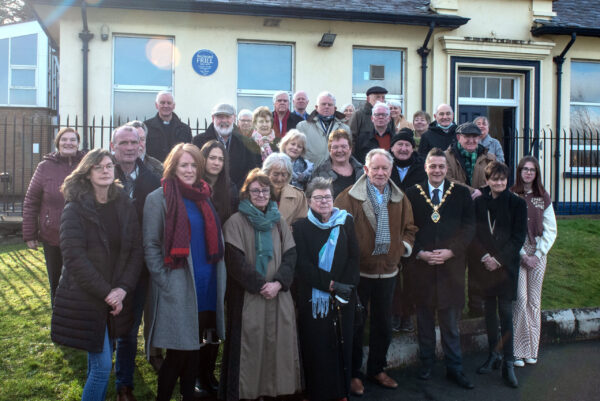 He added: “The Ulster History Circle is delighted to commemorate this distinguished musician with a blue plaque at the school where he achieved a unique triplet, as pupil, teacher, and principal.

“The Circle would like to thank Chapel Road Primary School for their assistance and Derry City and Strabane District Council for their financial support towards the plaque.”