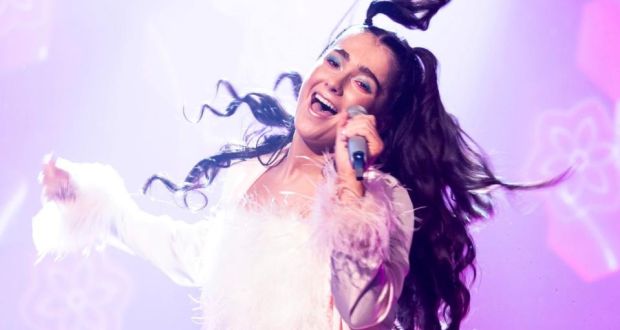 Scullion, who first became known as a finalist on The Voice UK in 2020, took the top spot with her entry That’s Rich, a song she said was inspired by a crossover of Blondie and The Gossip.

Her winning performance will see her travel to the main event in Turin, Italy in May and perform before a global audience of 180 million people.

Friday night’s contest marked the first opportunity in several years for members of the public to vote, although the winner was ultimately selected with both an international and live studio jury input.

“Given Ireland’s history with a fellow Derry girl like Dana who has done it before, I’m excited to be flying the flag and hope to do everybody proud,” she told RTÉ of a possible win in the build-up to the competition.

“I also think in recent years I’ve been so impressed with the music Eurovision has produced.”

In her burgeoning career – That’s Rich was the first song she penned – Scullion has duetted with Ella Eyre and was mentored by Grammy Award-winning coach and singer Meghan Trainor. Her music has been noted by BBC Introducing as well as numerous Spotify editorial playlists.

The five runner-up songs in order of audience and jury preference were Ashes of Yesterday (Janet Grogan) tied in second with Yeah, We’re Gonna Get Out Of It (Miles Graham); One Night, One Kiss, One Promise (Patrick O’Sullivan); I’m Loving Me (Rachel Goode); and Real Love (Brendan Murray).

The six finalists were chosen from more than 300 entries following a call out for participants on the Late Late Show last year.