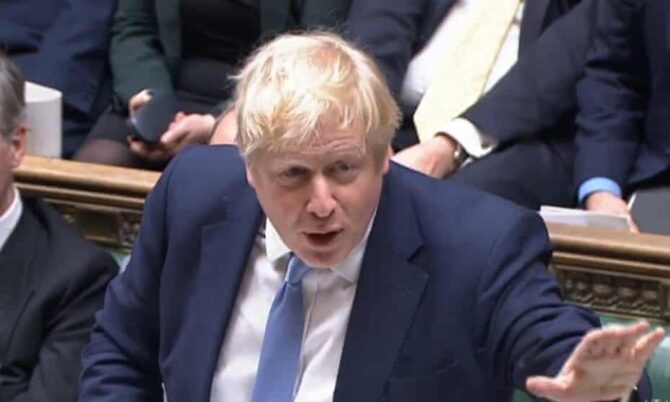 Said the Derry city councillor: “Boris Johnson should be out the door. The Tory instinct of privilege, arrogance and elitism means he needs to be pushed.

“Massive people power protests on the streets of London and everywhere this fraud impacts are needed.

“(Kier) Starmer and others in the political establishment won’t call for mass action to drive Johnson out – they fear a risen people as much as any other member of the British establishment.

“Those in the Stormont Executive who are eager to point the finger at Johnson have enacted their own version of ‘one rule for us and another for the rest’ over the last two years.

“All the Executive parties voted to crackdown on Black Lives Matter protests.

“They have all backed imposing disgraceful Tory pay cuts on workers while prices soar.

“They did nothing to protect workers and the vulnerable when Johnson slashed Universal Credit payments.

“However, the Executive parties did take care of elites and the politically connected with all sorts of handouts over the last two years.

“Johnson out the door would only be the beginning of undoing the damage caused by the political establishment over the last two years.

“We need to build a radical people power movement to reorder politics and priorities away from servicing elites and the super-rich.

“We need a radical redistribution of wealth to uplift workers and the least well-off in our communities,” added Cllr Harkin.