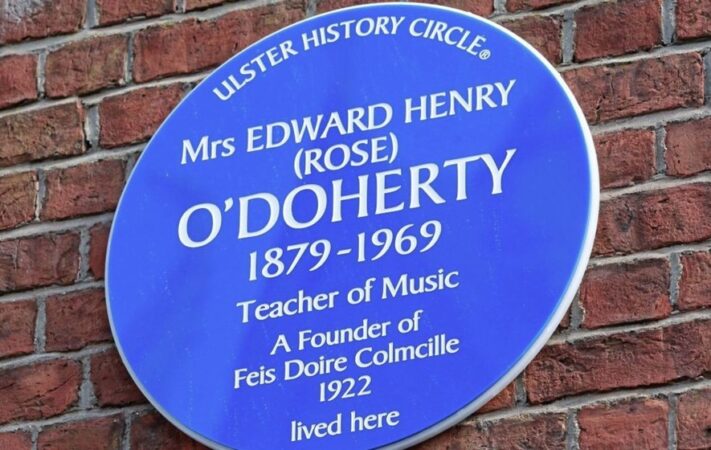 MEMBERS of Derry City and Strabane District Council’s Business and Culture Committee have approved the erection of four new Ulster Heritage Circle commemorative plaques to commemorate local men and women who have contributed to local history.

The Committee heard how the Ulster History Circle is a small, voluntary not-for-profit organisation that places commemorative plaques in places in honour of men and women who have contributed to local history. Plaques are erected with the permission of the owner of buildings.

It celebrates the nine counties contribution to the history, both locally and internationally.

It is a voluntary run organisation which does not have funding and relies on businesses and local authorities to fund its programme.

Their committee contains a range of expertise and takes nominations for plaques to commemorate people who meet their criteria.

The general rule is that a proposal to put up a plaque is not considered unless the person to be commemorated has been deceased for at least 20 years – less if the deceased person was born more than 100 years ago.

Derry City and Strabane District Council have delivered a series of Blue Plaques across the Council area from 2017-2021 among them plaques to commemorate Francis Ledwidge (1887-1917) Irish poet and soldier.

Killed in 1917 at Boezibnge in Belgium, who was stationed for 6 months during 1916 in Ebrington Barracks with the Royal Inniskilling Fusiliers; Annie Russell Maunder (1868-1947). the Irish Astronomer and Mathematician who was born in Strabane and a plaque for Mrs E.H. O’Doherty (1879-1969) Teacher of Music and Founder of the Féis Dhoíre Cholmcílle; Brigadier General Ambrose Ricardo (1866-1923, who had a distinguished war record and co-founded the Londonderry Féis.

The plaque dedicated to Dorothy Parke (1904-1990). who was a teacher and composer, was not erected as part of this five year programme due to restrictions around Covid, however the Ulster History Circle have indicated they intend to pick this up on the backlog of erections of plaques in early 2022 Covid permitting.

Members at the meeting were informed that it is intended that the plaques to Redmond Friel, Dorothy Parke, and James MacCafferty will be unveiled between February and April 2022 due to key anniversary dates.

In relation to the plaque for Redmond Friel (1907-1979), a Musician, Composer and Teacher, it is proposed to locate his commemorative plaque at Chapel Road Primary School on the Waterside, where he served as a pupil, teacher, and principal.

The school principal and governors are in agreement with this proposal. A date in February 2022 is proposed for the unveiling, when it is hoped that one of Friel’s star pupils will unveil the plaque.

The meeting heard how Dorothy Parke (1904 -1990) was a Teacher and Composer and her music pieces are still performed at the Feis and her collection of songs, ‘By Winding Roads’ remains popular in many primary schools.

She was born on Dunfield Terrace in the Waterside and there are plans in place to erect the plaque during the 100th anniversary of the Feis on St Columb’s Hall, with the agreement of the hall’s trustees.

James MacCafferty (1915 -1995) was a well known local musician, who was a leading organiser of the the Feis and the UHC have agreed that the plaque can be unveiled at Francis Street in April 2022 as part of the 100th anniversary of the Feis Dhoire Cholmcille.

Welcoming the proposal, the Committee Chair Cllr Conor Heaney said it was important that Council in partnership with the UHC recognise and acknowledge the important role so many local people have played in the city and district’s cultural and historic narrative.

He said he was delighted the local people were being recognised for their contribution in this way and looked forward to seeing the blue plaques erected at the various locations across the City and District and become part of our local heritage and tourism product.