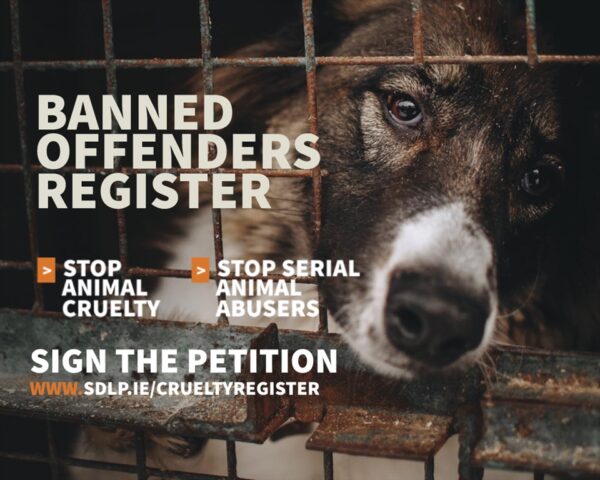 THE SDLP’s Derry Assembly representative Sinéad McLaughlin has called for a renewed focus on tackling animal cruelty after Sinn Féin teamed up with some DUP MLAs and Jim Allister to vote against a ban on fox hunting.

The SDLP has been working with the UPSCA on an All Island Animal Cruelty Register.

It would work to combat the breach of bans on owning or keeping animals and prevent people with convictions from getting a license to breed or sell animals.

It would also prevent people with relevant convictions working in animal care.

Said the Foyle MLA: “The appalling decision from Sinn Féin, some DUP MLAs and Jim Allister to pass up the opportunity to ban fox hunting and other hunting with dogs in the North has renewed the focus on our fight against animal cruelty.

“The outpouring of disgust since the vote shows the strength of feeling about animal rights issues.

“It also clearly demonstrates that those who voted against the legislation were going against the wishes of the vast majority of the public.

“Over the past year the SDLP has been working with the USPCA on an All Island Animal Cruelty Register.

“Our campaign received a huge response and would go some way to protecting animals by keeping them out of the hands of abusers and those with previous relevant convictions on both sides of the border.

“We must do everything we can to keep animals away from those who wish to do them harm.

“While I welcome previous commitments from DAERA Minister Edwin Poots and Justice Minister Naomi Long to explore the introduction of the register, it has now been some months since we last had an update and the end of the current Assembly mandate is looming with business piling up.

“The response to the vote on fox hunting shows the need for movement on this issue, there can be no feet dragging from the ministers.

“Over 15 years on from the fox hunting ban in Britain it is inconceivable that this abhorrent practice is still allowed on both sides of the border.

“While Sinn Féin and the DUP have teamed up to end hopes of a ban on this occasion, this matter is far from over and is sure to return to the Assembly in the next mandate.

“Unlike Sinn Féin, the SDLP will live up to our commitments to the electorate and keep working to ban fox hunting and create an All Island Animal Cruelty Register to protect the animals that contribute so much to our way of life,” added Ms McLaughlin.