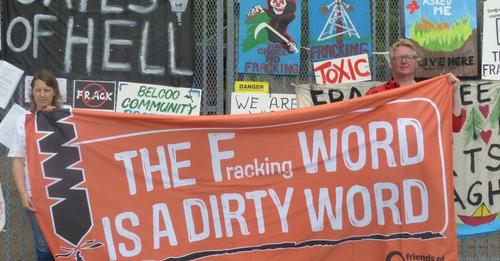 PEOPLE Before Profit Coouncillor Maeve O’Neill said has said that Sinn Féin and its Executive partners can’t be trusted to ban fracking.

“The Stormont Executive will very soon be deciding on petroleum licences that could give the green light to fracking and all other forms of petroleum extraction in Fermanagh and around Lough Neagh.

“LAMP Fermanagh have exposed how the divergence in Sinn Féin’s anti-fracking policy north and south could have massive implications.

“A current Sinn Féin Stormont bill references only banning fracking of shale rock. This leaves open the possibility of fracking sandstone rock – the predominant rock in the areas earmarked for this project. This is no coincidence.

“Just weeks ago a leaked government report examining petroleum licencing rejected the economic argument in favour of drilling and dismissed any suggestion that our energy bills would be cut if we invested in oil and gas.

“The evidence is clearly pointing us towards the need to ban all new oil and gas exploration and extraction.

“People Before Profit tabled a Climate Emergency Bill in the Dáil that would leave all remaining fossil fuels in the ground.

“This was blocked by the government parties in the South.

“Corporate Lough Neagh dredging, the inaction on an inquiry into Mobuoy dump, the bias towards Dalradian Gold’s toxic mining plans in the Sperrins, damning ‘conflicts of interest’ and fracking are all shocking examples of this hypocrisy.

“We will be joining campaigners taking action to demand loopholes allowing destructive fracking are closed. All forms of oil and gas exploration and extraction needs to be stopped.

“It’s clear none of the Stormont Executive parties can be trusted to challenge corporate polluters.