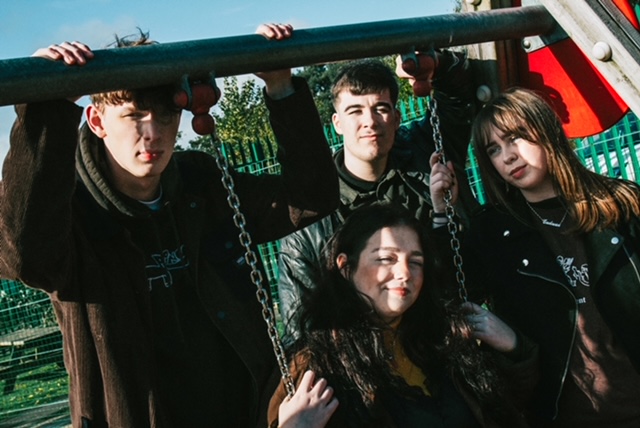 NWRC’s Fake Friends are a ‘New Breed’ of Band

A group of North West Regional College (NWRC) Music students have won the Clash of the New Breeds Band competition in Belfast.

The band, Fake Friends, clinched first place during the live finals at the Oh Yeah Centre, where six finalists competed for the trophy.

Despite their quirky name, the four members of Fake Friends, who are studying for the HND in Music at NWRC, are all best buddies.

“It’s ironic,” said Éadaoin O’Kane, the band’s bass player, “and we always get asked about the name, but we really are best friends.”

Éadaoin explained: “Clash of the New Breeds is run by the Volume Control team that work out of the Oh Yeah Centre in Belfast.

“It is an annual ‘battle of the bands’ type competition that runs over several months.

“The final live event consists of the six finalists competing for the trophy, amongst other cool prizes!

“We were excited to play in the finals and never expected to win. A huge shout out to the Volume Control team for running this event and being so lovely to work with.”

Oliver said: “Fake Friends was formed during our first year at college when we got put into bands for our course.

“We started out playing covers and then the four of us started writing our own original music together and formed the band now known as Fake Friends. We then started playing gigs outside of the college.

“We are also songwriters and have released four singles with each of us contributing to the writing of our songs. Neasa is the main lyricist and I have produced our two latest singles.

“Our song writing has developed over the years. If you were to listen to the first song we ever wrote together and our latest single, you would be very surprised at our growth as songwriters, and we could not have made this improvement without help from NWRC.”

“From the beginning, we have always enjoyed experimenting with different musical genres,” said Neasa.

“Our original music has a very indie-pop sound, but we like to add a more rock vibe to our live set.

“We take inspiration from artists such as Billie Eilish, Sam Fender, Rex Orange County and Paramore – I think these influences can be heard in our music.

“We have just released our fourth single ‘Lemonhaze’ (available on all streaming platforms). We are enjoying playing the song live and have plans to get back into the studio in the coming weeks.

“We are planning on playing gigs regularly around Northern Ireland now that the lockdown restrictions have lifted, and we can do so. “

For more on the band log on to https://www.facebook.com/BandFakeFriends and you can stream their new song Lemonhaze on all streaming platforms.