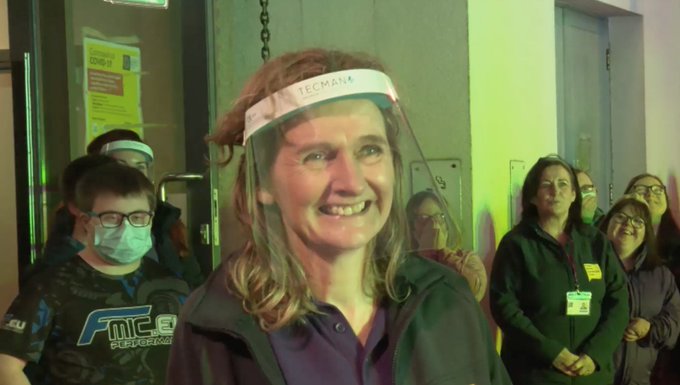 SURPRISE SURPRISE.. Foyle Down Syndrom Trust musical Therapist Josie Nugent gets a surprise on The One Show

RONAN Keating has delighted a charity in Derry with a transformed music room as part of The One Show’s Surprise Squad challenge for BBC Children In Need.

On Tuesday’s programme the ex-Boyzone frontman surprised the Foyle Down Syndrome Trust which has received a three-year grant of £94,594 from BBC Children in Need.

The charity delivers music therapy and group sessions for children and young people with Down Syndrome.

The Surprise Squad, which is made up of five young people who have benefited from Children In Need and want to give back, will transform a music room so it is a welcoming and creative space for users.

They have been visiting locations around the UK completing surprise challenges for BBC Children in Need funded projects that are in need of a little help.

The Irish singer and The One Show presenter said it has been an “absolute pleasure to be part of this fantastic project”, revealing the results of the challenge will be unveiled on Wednesday’s programme.

“The music room is beautiful and I know it’s going to be a place that will be treasured and used by the children and everyone here for years to come. Tune into The One Show tomorrow evening to see what we’ve been up to,” said Ronan.

Josie Nugent, music therapist at Foyle Down Syndrome Trust said: “We were over the moon when we were surprised by the Surprise Squad and they told us that they had something exciting in store for us.

“I would never have dreamt of something like this for us, so we are blown away to have a new music room, which will open new pathways of communication, social interaction, and creative fun for all the young people that we support.”

She added: “While I’d known about the Surprise Squad Project, I had not realised that I had been selected to be surprised by them.

“It’s been the best kept secret at work for the past few months and the biggest and most amazing surprise and boost for me in my work as music therapist over the past 10 years.”

The Surprise Squad’s first challenge was for St Oswald’s Hospice in Tyne & Wear where they created a secret garden, their second was for Mr D’s Healthy Body Healthy Mind in Manchester where they delivered a fundraising event and helped create a mural to celebrate the project’s work.