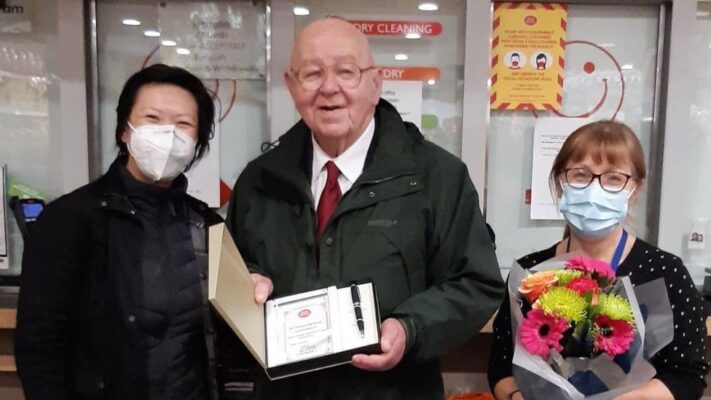 A DERRY postmaster at the city’s Buncrana Road post office has retired after 45 years serving his community.

Jim Gough, now 88, first took on a role at Carlisle Road Post Office in 1976 after a friend announced his retirement and asked if he wanted to take over.

After reorganising that post office, he then took on two more branches, one of which was at the Buncrana Road site.

“I was lucky to have first class people about me,” Jim said, “without them I would not have remained.”

Jim believes, at one point in time, he may have known as many as half the people in Derry because he ran three different branches.

He said he enjoyed talking to people from all across the local community as part of his work.

Reflecting on the evolution of the post office, Jim remarked it had “changed drastically over the years” with the “‘introduction of computers, online business, emails”.

Jim says his staff “went beyond the call of duty to give a good service” to many elder;y customers during the Covid-19 pandemic

Jim’s branches helped support many elderly people throughout the Covid-19 pandemic which led to an overall increase in the number of elderly customers because, Jim said, the staff “went beyond the call of duty to give a good service”.

Although the initial impact of the pandemic saw footfall drop sharply, he said that with the right precautions in place customers gradually returned.

Jim’s time as postmaster also spanned some of the most turbulent periods of the Troubles in the North of Ireland.

He said at one point he believed he was the most robbed postmaster in the UK, but continued running his branches through a combination of “stubbornness and great staff”.

The 88-year-old has lived in Derry his entire life and has decided now is the right time “to hang up the date stamp”.

Jim’s daughter, Geraldine Gough, took over the day-to-day running of Buncrana Road post office some 15 years ago, and he is certain his beloved branch will go from strength to strength in her hands.

Upon retiring, Jim received a framed long service leavers’ commemoration letter from Post Office chief executive Nick Read, as well as gift vouchers and a pen to thank him for his service.