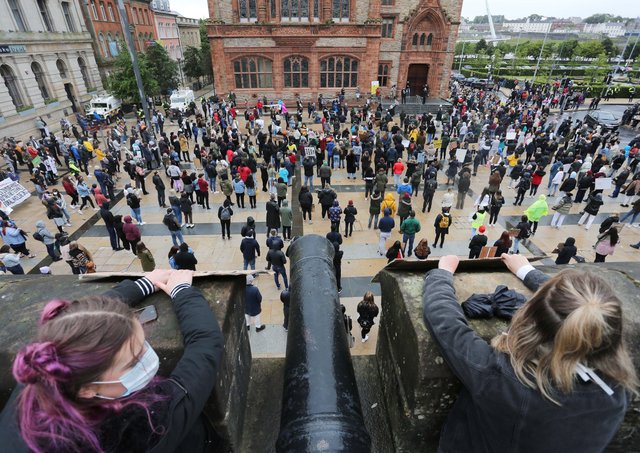 PEOPLE Before Profit Cllr Shaun Harkin has said the Black Lives Matter protests had firmly put racism at the heart of the political establishment in the North and across the UK.

Said Cllr Harkin: “Black History Month is an important opportunity to fully acknowledge the tremendous contribution made by black people to our society.

“We very much welcome the focus on the role of slavery, colonisation, empire and capitalism in giving rise to racism and it’s persistence.

“The gap between what the Stormont political establishment will say about challenging racism and what they do is immense.

“Exemplifying this was the treatment of Black Lives Matters protests in Derry and Belfast by all five of the Stormont Executive parties and the PSNI.

“There is no better example of how racism comes from the top of society. Elites benefit from the status quo and their instincts are to protect it.

“Fully eradicating racism and all forms of discrimination will require the dismantling of the unequal economic order underpinning it.

“This is not something the Stormont, Dáil or Westminster establishment are interested it.

Unlike the Executive parties, People Before Profit were proud to join the Black Lives Matter protests in Derry and Belfast.

We celebrate the contribution of black and minority communities across our society. We are all so much better for it. We commend all those in our communities working everyday for social good and who also challenge the barriers of discrimination.

We have a long way to go to create a society fit for and welcoming to everyone but we are on the road.”